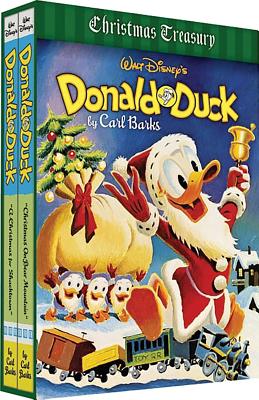 Two spectacular volumes of Christmas fun starring the most famous duck in the world presented in a handsome slipcase.

For readers who are looking for something really special and enormously fun to give to their loved ones in this holiday season, we present, in one package, two of the best Christmas comics stories you’ll ever read: “Christmas on Bear Mountain” featuring the introduction of Uncle Scrooge (the World’s Richest Duck) and “A Christmas For Shacktown,” in which Scrooge loses his entire fortune even as Donald Duck and his nephews try to bring some Christmas cheer to the suffering children of Shacktown. But that’s only the beginning! In these twin volumes, you’ll find page after page after page of intrepid quests, daring adventures, and breathtaking escapes. Readers of all ages will be spellbound by these timeless classics — with their engaging plots, clever humor, and heartwarming themes. In all, these two books provide nearly 400 pages of full-color comics! A double dose of Disney’s Donald Duck! A thoughtful, memorable, can’t-miss special Christmas item — at a very special price — handsomely presented in an inviting gift box set that will delight readers of any age.

Gary Groth is the co-founder of The Comics Journal and Fantagraphics Books. He lives in Seattle.