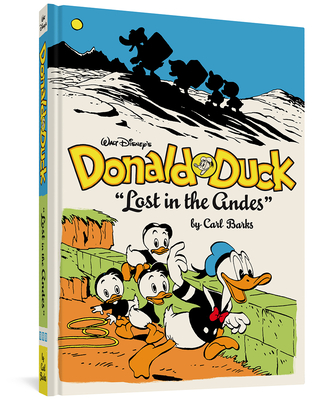 This is book number 7 in the The Complete Carl Barks Disney Library series.

The first in a historic series of books collecting the comic book stories of “The Good Duck Artist.”

Carl Barks’ Donald Duck and Uncle Scrooge comics are considered among the greatest artistic and storytelling achievements in the history of the medium. After serving a stint at the Walt Disney studios as an in-betweener and a gag-man, Barks began drawing the comic book adventures of Donald Duck in 1942. He quickly mastered every aspect of cartooning and over the next nearly 30 years created some of the most memorable comics ever drawn — as well as some of the most memorable characters: Barks introduced Uncle Scrooge, the charmed and insufferable Gladstone Gander, the daffy inventor Gyro Gearloose, the bumbling and heedless Beagle Boys, the Junior Woodchucks, and many others.

Barks alternated between longish, sprawling 20- or 30-page adventure yarns filled with the romance of danger, courage, and derring-do, whose exotic locales spanned the globe, and shorter stories that usually revolved around crazily ingenious domestic squabbles between Donald and various members of the Duckburg cast. Barks’s duck stories, famously enjoyed equally by both children and adults, are both evanescent celebrations of courage and perseverance and depictions of less commendable traits — greed, resentment, and one-upmanship.

Our initial volume begins when Barks had reached his peak — 1948-1950. Highlights include:

• The title story, “Lost in the Andes” (Barks’s own favorite). Donald and the nephews embark on an expedition to Peru to find where square eggs come from only to meet danger in a mysterious valley whose inhabitants all speak with a southern drawl, and where Huey, Dewey, and Louie save Unca’ Donald’s life by learning how to blow square bubbles!

• Two stories co-starring the unbearably lucky Gladstone, including the epic “Race to the South Seas,” as Donald and Gladstone try to win Uncle Scrooge’s favor by being the first to rescue him from a desert island.

• Two Christmas stories, including “The Golden Christmas Tree,” one of Barks’s most fantastic stories that pits him and the nephews against a witch who wants to destroy all the Christmas trees in the world.

• In other stories, Donald plays a TV quiz show contestant and ends up encased in a giant barrel of "Shaky-Jell," a truant officer who matches wits with his nephews, and a ranch hand who outwits cattle rustlers.

Mr. Barks taught me that comics could be high art, and I consider his work to be the best storytelling I’ve experienced in any form. …Fantagraphics… is publishing the Barks collection in beautiful hardcover books that do great honor to the cartoonist and his stories, and I can’t wait to buy them for my kids. Proof that great storytelling endures from generation to generation.

— Jeff Kinney (author of the Diary of a Wimpy Kid series)

Carl Barks was a great storyteller… We had a deep appreciation
of [his] comics when we were kids. We read his stories over and
over again. Nobody knew his name. We just called him ‘The Good
Artist’ because he was so much better than all the other Disney
artists.
— R. Crumb

The Hans Christian Andersen of comic books.
— Will Eisner

Even the silliest premise, when executed by an artist in perfect control of his gifts, can land with deftness and grace - that's something that strikes you again and again as you read Barks' work. …[T]his collection makes a perfect introduction to one of the greatest all-ages comics artists of all time.

Barks’ strips combine high adventure with humor and subtle cultural commentaries, but they remain grounded in character... Lost in the Andes is a gorgeously packaged collection of some of the finest comics ever made.

This volume reprints tales from December 1948 through August 1949, when Barks was in high feather as a creator of breathless adventures and light comedies for his Ducks... Great pop culture, great analysis. Scrooge is always searching for more gold, and there’s plenty here. [Rating] 10/10

(Starred Review) One of comics' revered masters gets a fresh new reprinting worthy of his work and accessible to kids.... This volume finds [Barks] at a creative peak, combining the bold adventuring of Tintin with the wisely cynical view of human weakness of John Stanley…. A wonderful project that should put Barks’s name in front of new generations of admirers.

The initial volume in the Barks series is... all pleasure, a treasury of deceptively simple gag and adventure stories that fashioned with wit, irony, and impeccable craftsmanship…. The longer stories here... are suspenseful, surprising, funny, and fresh... These kids' comics are far from kids' stuff -- this is for everyone.

Even now, Barks’ stories are clever and funny, as he leads the ducks into impossible situations and then gives them unexpected ways out. And they’re poignant in their own way, too.... And for those who just want to curl up with more than 200 pages of some of the best-written comics ever published, Lost in the Andes has all the square eggs, rubber bricks, golden Christmas trees, and races around the world that any kid or grown-up could ever want.

Barks, the artist, is a master cartoonist, drawing lively, expressive characters with a graceful sense of movement. His beautiful, detailed backgrounds plant the ducks in a fully realized world that adds weight to his storytelling.... Fantagraphics Books... does its usual high quality work here... For both newcomers to Barks' work and diehard fans, this is a book that any comic book reader would love...

...Fantagraphics made my dreams come true with this perfect book. For $25 you get 200 pages of some of the most important comics ever made and about 30 pages of the story of Carl Barks' life along with story notes and annotations. This is a f***ing steal.

Happily, the stories look great and the book is a wonder to hold in your hand.... As to the content, itself, it's just as remarkable an achievement in comics as I remembered.... The contents of the book are as good as they're going to get...
— Augie DeBlieck Jr. - Comic Book Resources

Carl Barks used ducks to shine a light on the human condition and make jokes while also making commentary on us all. Despite these stories being published in 1948 and 1949, they truly stand the test of time....
— Nick Boisson - Comics Bulletin

This is as beautiful a book as I’ve purchased this year, and the stories within have much to offer both children and adult fans of visual storytelling and even comedy. Barks knew how to contract a joke, and this is a masterclass.

In short, this is exactly the book that Barks fans and the curious have been waiting for. ...Barks remains an exemplary cartoonist. His work is thrilling, funny and rather knowing about human nature... How good was Carl Barks? Pretty goddamned good.

I like to think that Carl Barks, an unpretentious storyteller who created for an audience of children whose intelligence, ingenuity and decency he never doubted, would approve and be gladdened by how his work, this time around, is being put back out into the world.

...I’m impressed with the quality of the publication. In my estimation, the coloring is excellent and the format engaging…. The critical essays composed by a number of Barks scholars are also insightful and well written.... In my opinion, as a Carl Barks fan, this initial volume is well worth acquiring!

The stories, of course, are outstanding. Most of the long adventure tales are classics in their own right.... Walt Disney’s Donald Duck: Lost in the Andes is an excellent start to Fantagraphics’ Carl Barks Library.

This is really fantastic storytelling.... I picked this up thinking it’d be a good chance to see if I liked Carl Barks and what the fuss was all about. Well, now I get it – and I’m hooked. ...[T]his is well worth the purchase for any fan of classic comics.

The new Carl Barks book from Fantagraphics might be the best designed, best realized reprint book any company has done to date.