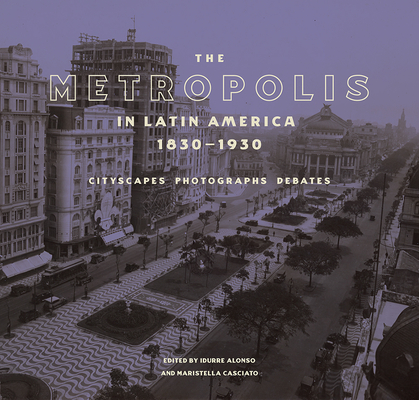 
Email or call for price
This volume examines the unprecedented growth of several cities in Latin America from 1830 to 1930, observing how sociopolitical changes and upheavals created the conditions for the birth of the metropolis.

In the century between 1830 and 1930, following independence from Spain and Portugal, major cities in Latin America experienced large-scale growth, with the development of a new urban bourgeois elite interested in projects of modernization and rapid industrialization. At the same time, the lower classes were eradicated from old city districts and deported to the outskirts. The Metropolis in Latin America, 1830–1930 surveys this expansion, focusing on six capital cities—Havana, Mexico City, Rio de Janeiro, Buenos Aires, Santiago de Chile, and Lima—as it examines sociopolitical histories, town planning, art and architecture, photography, and film in relation to the metropolis.

Drawing from the Getty Research Institute’s vast collection of books, prints, and photographs from this period, largely unpublished until now, this volume reveals the cities’ changes through urban panoramas, plans depicting new neighborhoods, and photographs of novel transportation systems, public amenities, civic spaces, and more. It illustrates the transformation of colonial cities into the monumental modern metropolises that, by the end of the 1920s, provided fertile ground for the emergence of today’s Latin American megalopolis.
Idurre Alonso is associate curator of Latin American collections at the Getty Research Institute.

Maristella Casciato is senior curator and head of architectural collections at the Getty Research Institute.

“The Metropolis in Latin America is an excellent survey featuring the city’s key role in the conformation of the social and political order of the newly born republics, with enlightening essays that discuss a broad range of interdisciplinary approaches. A magnificent iconographic collection shows how Latin American urban development challenged Western architecture’s aesthetic canons, became an accurate laboratory for the newly constituted discipline of urbanism, and shaped the structure of its own image and identity, as we can see today.”

“The authors shed light on the transformations that modified the colonial model of Iberian cities in America, from Mexico to Argentina, displacing the axis of viceregal power toward a circuit of cities that were able to expand and gather international prestige during the republican period. The book includes an unusual repertoire of topics in the field of research of history at the early stages of modernity in Latin America.”

“Fills vital gaps in scholarship about this foundational period. . . . The Metropolis gives readers a deeper understanding for why these cities are the way they are today.”
— Lauren Moya Ford