Antiquities in Motion: From Excavation Sites to Renaissance Collections (Hardcover) 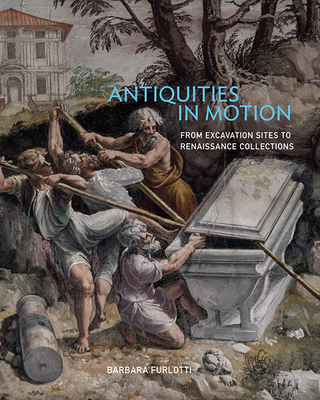 Antiquities in Motion: From Excavation Sites to Renaissance Collections (Hardcover)


Email or call for price
An exciting new approach to understanding the trade of antiquities in early modern Rome traces the journey of objects from discovery to display.

Barbara Furlotti presents a dynamic interpretation of the early modern market for antiquities, relying on the innovative notion of archaeological finds as mobile items. She reconstructs the journey of ancient objects from digging sites to venues where they were sold, such as Roman marketplaces and antiquarians’ storage spaces; to sculptors’ workshops, where they were restored; and to Italian and other European collections, where they arrived after complicated and costly travel over land and sea. She shifts the attention from collectors to peasants with shovels, dealers and middlemen, and restorers who unearthed, cleaned up, and repaired or remade objects, recuperating the roles these actors played in Rome’s socioeconomic structure.

Furlotti also examines the changes in economic value, meaning, and appearance that antiquities underwent as they moved throughout their journeys and as they reached the locations in which they were displayed. Drawing on vast unpublished archival material, she offers answers to novel questions: How were antiquities excavated? How and where were they traded? How were laws about the ownership of ancient finds made, followed, and evaded?
Barbara Furlotti is associate lecturer at the Courtauld Institute of Art in London. She authored A Renaissance Baron and His Possessions: Paolo Giordano I Orsini, Duke of Bracciano (1541–1585) and contributed to Display of Art in the Roman Palace, 1550 1750 (Getty Publications, 2014).

“Barbara Furlotti’s book is essential reading for scholars of sixteenth-century European art history and antiquarianism. Presenting new archival documents on the excavation and collecting of Roman antiquities, Furlotti writes a fascinating account of the mechanisms of the antiquities market in sixteenth-century Rome and its environs. . . . Italian antiquities’ dealing in the sixteenth century was rife with forgery and precocious antiquizing creativity, with finders, dealers, and artists collaborating to supply the demand of an insatiable, often gullible market for ancient works of art. It was a secretive trade, and one of several implications of Furlotti’s uncovering it is that we need urgently to verify even more closely than before the ancient integrity (or Renaissance ingenuity) of every artifact that entered collections at the time.”
--Robert W. Gaston, University of Melbourne


One of Times Literary Supplement’s Books of the Year for 2019!


“Furlotti maps precisely how consumers were supplied with antiquities through a vast network of ﬁnders and ﬁxers, middlemen, and women, across all social classes, who forged new professions out of the Renaissance craze for antiquities. In doing so, and with characteristic style and clarity, Furlotti fundamentally changes the way we will study the history of Renaissance collecting.”
—Sally Hickson, Renaissance Quarterly


“Providing important background to some of the most famous finds in 16th-century Rome, the book paints a detailed picture of the early modern city as a hotbed of discovery, deals, and deception.”
— Current World Archaeology

”The book effectively challenges the notion of a civilised antiquarian by revealing the lengths that people would go to ?nd, trade, transport and ultimately own antiquities. Indeed, it is a timely reminder that we should perhaps re?ect on the contemporary trade in antiquities and its social and ethical issues.”

“The book is thoughtfully illustrated and beautifully produced . . .  and will change the way we think about the history of antiquities collecting.”
— William Stenhouse

“Essential reading for any scholar in the field of Renaissance collections and provides crucial insights into the complex socio-cultural context of the antiquities’ trade in Rome during the Seicento.”

“Will undoubtedly become a reference work for anyone interested in the history of collecting, the reception of Classical sculpture and the social and economic life of early modern Rome.”
— Adriano Aymonino

“A compelling, insightful and lucid analysis of how the Renaissance art market did not simply mobilize, but also transformed antiquities, as well as their meaning and value.”
— Tiziana D’Angelo

“As a book studded with fascinating anecdotes and thick descriptions of commercial practice, Antiquities in Motion greatly fulfills its task of delineating the complexity of the Roman antiquarian market. . . . This gracefully written and generously illustrated book significantly updates our understanding of the often-problematic dynamic of early modern collecting and will surely provoke further theoretical reflections on attitudes toward antiquity and the nature of material culture in early modern Italy.”
— Wenyi Qian

“As entertaining as it is instructive.”
— Anthony Grafton