Soul of the Rhino: A Nepali Adventure with Kings and Elephant Drivers, Billionaires and Bureaucrats, Shamans and Scientists and the India (Hardcover) 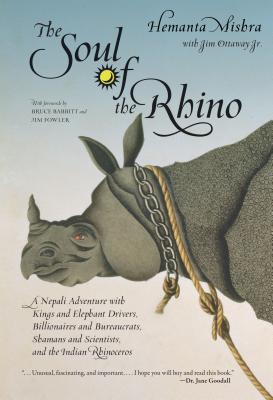 Soul of the Rhino: A Nepali Adventure with Kings and Elephant Drivers, Billionaires and Bureaucrats, Shamans and Scientists and the India (Hardcover)


Email or call for price
The story of a Nepalese who has spent his entire life safeguarding an endangered speciesThis new release is a spirited yet humble account of one man's scientific career and personal journey to save the endangered rhinoceros in his native Nepal. Fresh out of university, Mishra began his work with aboriginal tribes, the Nepalese royal house, the World Wildlife Fund, and the World Bank to protect the animal in its Himalayan habitat. In spite of decades spent political arm-wrestling, traveling and fund-raising, Mishra is still fearful to this day that Maoist insurgents and poachers will kill off the Asian rhinoceros for good--a tragedy after all his hard-won gains. This is the first book about saving the Asian one-horned rhinoceros, and the only one to delve into the multi-layered political labyrinths of wildlife conservation in South Asia. Filled with candor and bittersweet humor, Mishra recreates his journey on behalf of the rhino, an ugly yet enchanting, terrifying yet delicate creature. In the tradition of Leakey and Fossey, Mishra will be hailed by the media as the animal's advocate, and SOUL OF THE RHINO will quickly engage the soul of the reader.Hemanta Mishra now lives in Virginia. This is his first book.
Hemanta Mishra has worked with the Smithsonian Institution, the World Wildlife Fund, the World Bank, and Asian Development Bank and other major conservation groups. He was a key player in the international team that preserved and stabilized the habitat and is credited with halting the extinction of the rhino and Tiger populations in Nepal. He lives in Vienna, Virginia.

"The Soul of the Rhino is unusual, fascinating and important. It provides not only a rare insight into the personality and behavior of the highly endangered and little known Asian rhino, but an equally absorbing picture of the people who share its habitat. Hemanta Mishra is a native of Nepal and he shares his struggle to reconcile western conservation science, learned when he studied in America, with the cultural beliefs of his people; he attempts to combine hard facts with the mystical values of eastern philosophy. The Soul of the Rhino is also a commentary on the way in which wildlife management can be helped or tragically hindered by revolution, politics and the commitment, or lack of it, of those in power. Most important, it will surely inspire other young people in Asia to follow in his footsteps. I hope you will buy and read this book." --Dr. Jane Goodall, DBE, Founder - the Jane Goodall Institute & UN Messenger of Peace

"Hemanta Mishra helped to establish Nepal’s famous Chitwan National Park, and he has with great dedication fought for three decades to assure the survival of its rare Indian rhino.  From the unique perspective of a Nepali dealing with conservation battles in his own country, he describes his contacts with everyone from poacher and foreigner to bureaucrat, royalty and rhino.  I enjoyed The Soul of the Rhino immensely for its potent conservation message, as well as its insights into a culture and the soul of the author." --George B. Schaller, Wildlife Conservation Society

It is the first book of its kind that proves that nature conservation in Asia does not only depend upon good Western science.  But like politics in America, it is an art an art of the possible an art that puts human needs and culture in the forefront of environmental conservation.” --Lodi Gyari, Special Envoy of His Holiness the Dalai Lama

"This book is much more than a story about rhinos. It is an account of the traditions, customs, and rituals of the people who live in the southern Terai region of Nepal known as Chitwan. It is also a story about how one man embarked on a cause to save this sacred national symbol from the effects of rampant habitat destruction and illegal poaching." --Leon J. Weil, former U.S. ambassador to Nepal (1984-1987)

"For anyone interested in wildlife, the Himalayan region, Hindu and Buddhist culture, this book is a delight. . . . Many well-meaning, dedicated conservation supporters have written enthusiastically about environmental, species and cultural conservation -- but Mishra has not only talked the talk,' he has really walked the walk,’ as the reader will learn." --Kenneth Nebenzahl, director of the American Himalayan Foundation, member of the WWF-US Council, and life trustee of the University of Chicago

"[Mishra's] a gutsy, committed man and a charming writer--and the rhinos could have no faster friend." --National Geographic Adventure

"A mix of Western science and Eastern mythology, 'Soul' could be called 'Zen and the Art of Rhinoceros Maintenance'." --Bill Heller, New York Post

"The Soul of the Rhino is a fascinating look at the heart of a conservationistand what it takes to save an iconic species." --Smithsonian Zoogoer