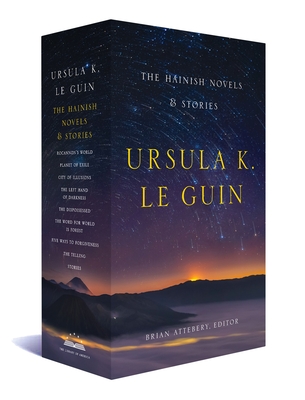 
Usually Ships in 1-5 Days
For the first time, a deluxe collector's edition of the pathbreaking novels and stories that reinvented science fiction, with new introductions by the author.

Winner of the 2018 Locus Award for Best SF Collection.

In such visionary masterworks as the Nebula and Hugo Award winners The Left Hand of Darkness and The Dispossessed, Ursula K. Le Guin redrew the map of modern science fiction, imagining a galactic confederation of human colonies founded by the planet Hain, an array of worlds whose divergent societies—the result of both evolution and genetic engineering—allow her to speculate on what is intrinsic in human nature. Now, for the first time, the complete Hainish novels and stories are collected in a deluxe two-volume Library of America boxed set, with new introductions by the author.

Volume one gathers the first five Hainish novels: Rocannon’s World, in which an ethnologist sent to a bronze-age planet must help defeat an intergalactic enemy; Planet of Exile, the story of human colonists stranded on a planet that is slowly killing them; City of Illusions, which finds a future Earth ruled by the mysterious Shing; and the Hugo and Nebula Award-winning masterpieces The Left Hand of Darkness and The Dispossessed—as well as four short stories.

Volume two presents Le Guin’s final two Hainish novels, The Word for World Is Forest, in which Earth enslaves another planet to strip its natural resources, and The Telling, the harrowing story of a society which has suppressed its own cultural heritage. Rounding out the volume are seven short stories and the story suite Five Ways to Forgiveness, published here in full for the first time.

The endpapers feature Le Guin's own hand-drawn map of Gethen, the planet that is the setting for The Left Hand of Darkness, and a full-color chart of the known worlds of Hainish descent.

LIBRARY OF AMERICA is an independent nonprofit cultural organization founded in 1979 to preserve our nation’s literary heritage by publishing, and keeping permanently in print, America’s best and most significant writing. The Library of America series includes more than 300 volumes to date, authoritative editions that average 1,000 pages in length, feature cloth covers, sewn bindings, and ribbon markers, and are printed on premium acid-free paper that will last for centuries.
Ursula K. Le Guin is one of the most celebrated writers of her generation, recipient of multiple Hugo, Nebula, Locus, and World Fantasy Awards. In 2014, she was awarded the National Book Foundation Medal for Distinguished Contribution to American Letters.

Brian Attebery, editor, is professor of English at Idaho State University and the editor of Journal of the Fantastic in the Arts. He edited The Norton Book of Science Fiction (1997) with Ursula K. Le Guin and Karen Joy Fowler and is the author of Stories About Stories: Fantasy and the Remaking of Myth (2014) and Decoding Gender in Science Fiction (2002), among other books.

“Genre cannot contain Ursula Le Guin: she is a genre in herself.” —Zadie Smith

“Ursula Le Guin can lift fiction to the level of poetry and compress it to the density of allegory.”
—Jonathan Lethem

“Belongs in the library of everyone who enjoys the best that science fiction has to offer.” —Locus Magazine