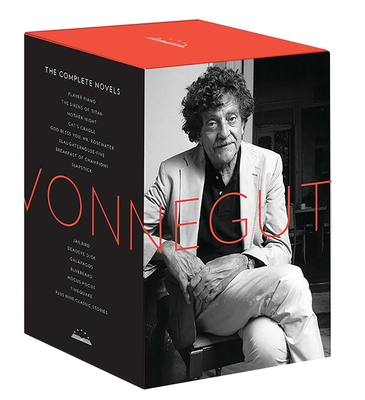 The ultimate Vonnegut: all 14 novels plus a selection of the best of his stories in a definitive collector's boxed set.

The novels of Kurt Vonnegut defined a generation a remain among the most enduringly popular and influential works of the last century. Now, for the first time, they are available in a single collector's edition, featuring authoritative annotated texts. This boxed set includes four Library of America volumes:

LIBRARY OF AMERICA is an independent nonprofit cultural organization founded in 1979 to preserve our nation’s literary heritage by publishing, and keeping permanently in print, America’s best and most significant writing. The Library of America series includes more than 300 volumes to date, authoritative editions that average 1,000 pages in length, feature cloth covers, sewn bindings, and ribbon markers, and are printed on premium acid-free paper that will last for centuries.

Sidney Offit, editor of the Library of America's four-volume Kurt Vonnegut edition, has written novels, books for young readers, and memoirs including, most recently, Friends, Writers, and Other Countrymen. He was senior editor of Intellectual Digest, book editor of Politics Today, and contributing editor of Baseball Magazine. He wrote the foreword to Look at the Birdie, a collection of Kurt Vonnegut’s unpublished short fiction.

"This is likely the most attractive edition of Vonnegut you'll ever own." — Gary K. Wolfe, Locus Magazine