Flowing with the Pearl River: Memoir of a Red China Girl (Paperback) 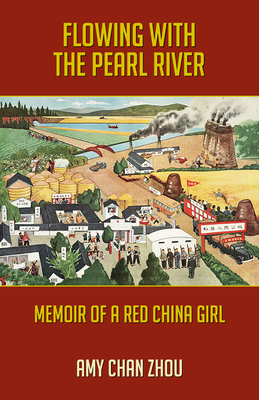 Flowing with the Pearl River: Memoir of a Red China Girl (Paperback)

Amy Chan Zhou's searing memoir about growing up in rural Communist China features descriptions of pastoral beauty and tales of the simple joys of raising farm animals or catching fish in a local river. However, her childhood is scarred by the primitive conditions, her family's everyday struggle to obtain food, and the horror of witnessing relatives being tortured on a stage during "public denouncing" meetings.

As the Communists take control of China in 1949, we follow the harrowing experiences of Chan Zhou's great-grandparents, grandparents, father, and mother during the 1950s, '60s, and '70s when landlords, business owners, artists, and scholars were branded as "bad elements" and "class enemies." As a teenager in the 1970s, while selling vegetables on the black market, Chan Zhou is accused of being a "little capitalist trader."

The death of Mao ultimately saves Chan Zhou from being sent to a detention center, and her family's destiny is forever altered by Deng Xiaoping's reform that allows her family to reunite in Hong Kong, and subsequently emigrate to the United States.

A blend of Wild Swans and The Red Scarf Girl, Flowing with the Pearl River is a vividly accurate portrayal of one family's painful experiences during Communism and the Cultural Revolution in China, and their eventual escape to freedom.