A Patriot's History of the United States: From Columbus's Great Discovery to America's Age of Entitlement, Revised Edition (Paperback) 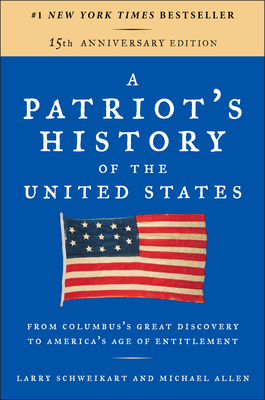 A Patriot's History of the United States: From Columbus's Great Discovery to America's Age of Entitlement, Revised Edition (Paperback)

Fifteen years ago, Professors Larry Schweikart and Michael Allen set out to correct the doctrinaire biases that had distorted the way America’s past is taught – and they succeeded. A Patriot’s History of the United States is the definitive objective history of our country, presented honestly and fairly.

Schweikart and Allen don’t ignore America’s mistakes through the years. Instead, they put them back in the proper perspective, celebrating the strengths of the men and women who cleared the wilderness, abolished slavery, and rid the world of fascism and communism.

Now in this revised fifteenth-anniversary edition, a new generation of readers will learn the truth about America’s discovery, founding, and advancement, from Columbus’s voyage to Trump’s promise to “Make America Great Again."

Larry Schweikart is a retired professor of history at the University of Dayton. He has written more than twenty books on banking and financial history, business history, and national defense, including The Entrepreneurial Adventure, America’s Victories, 48 Liberal Lies About American History, Seven Events That Made America America, and, with Dave Dougherty, A Patriot’s History of the Modern World. In 2017 he published How Trump Won with Joel Pollak, and in 2019 his biography of Ronald Reagan, Reagan: The American President, appeared. He lives in Chandler, Arizona with his wife, Dee, and has one grown son, Adam.

Michael Allen was born and raised in Ellensburg, Washington, and served as a Marine Corps artilleryman in Vietnam. He is a professor emeritus of history at the University of Washington, Tacoma, and is the author of the prize-winning Western Rivermen, 1763–1861 and Rodeo Cowboys in the North American Imagination, as well as several other books on American history and the American West. He lives in Ellensburg, and has three grown children, Jim, Davy, and Caroline.
“In A Patriot’s History of the United States, Larry Schweikart and Michael Allen remind us what a few good individuals can do in just a few short centuries… A fluid account of America from the discovery of the Continent up to the present day.”
—Brandon Miniter, The Wall Street Journal

“There are a thousand pleasant surprises and heartening reminders that underneath it all America remains a country of ideas, ideals, and optimism—and no amount of revisionism can take that legacy away.”
—John Coleman, Humane Studies Review

“A welcome, refreshing, and solid contribution to relearning what we have forgotten and remembering why this nation is good, and worth defending.”
—Matthew Spalding, National Review

“Were the Puritans puritanical? Did the robber barons really rob anyone? What made the Great Depression so great? Historian Larry Schweikart sets the record straight.”
—Marvin Olasky

“Any reader of Schweikart and Allen’s book will see immediately that it is a serious and substantive volume, based on a full recognition of the important secondary sources written by our major historians.”
—Ronald Radosh, Front Page Magazine