The Intellectual Devotional: American History: Revive Your Mind, Complete Your Education, and Converse Confidently about Our Nation's Past (Hardcover) 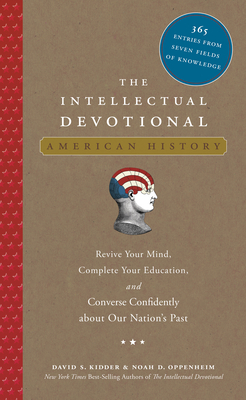 The Intellectual Devotional: American History: Revive Your Mind, Complete Your Education, and Converse Confidently about Our Nation's Past (Hardcover)


Usually Ships in 1-5 Days
Modeled after those bedside books of prayer and contemplation that millions turn to for daily spiritual guidance and growth, the national bestseller The Intellectual Devotional—offering secular wisdom and cerebral nourishment—drew a year's worth of readings from seven different fields of knowledge. In The Intellectual Devotional: American History, authors David S. Kidder and Noah D. Oppenheim have turned to the rich legacy of American history for their selections. From Thomas Jefferson and Benjamin Franklin to Martin Luther King Jr., from the Federalist Papers to Watergate, the giant figures, cultural touchstones, and pivotal events in our national heritage provide a bountiful source of reflection and education that will refresh knowledge, revitalize the mind, and open new horizons of intellectual discovery.
David S. Kidder is an entrepreneur with a wide range of technology and marketing expertise. Kidder and his companies have appeared in numerous publications including the New York Times, the Wall Street Journal, USA Today, and Fast Company. Kidder is a graduate of Rochester Institute of
Technology and was a recipient of ID magazine's International Design Award. He lives in Westchester, New York, with his wife, Johanna, and son.

Noah D. Oppenheim, a senior producer of NBC's Today show, has extensive experience in television and print journalism. He has produced and reported for Scarborough Country and Hardball with Chris Matthews, and his writing has appeared in Esquire, the Wall Street Journal, Men's Health, and the Weekly Standard. He resides in New York City.