Ensouling Language: On the Art of Nonfiction and the Writer's Life (Paperback) 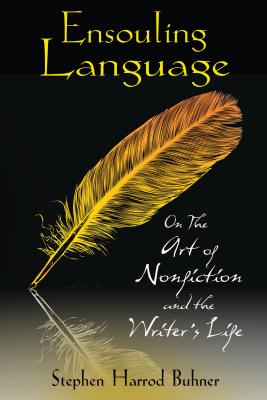 Ensouling Language: On the Art of Nonfiction and the Writer's Life (Paperback)

• Shows how nonfiction, especially how-to and self-help, can take on the same power and luminosity as great fiction

Approaching writing as a sacred art, Stephen Buhner explores the core of the craft: the communication of deep meaning that feeds not just the mind but also the soul of the reader. Tapping into the powerful archetypes within language, he shows how to enrich your writing by following “golden threads” of inspiration while understanding the crucial invisibles essential to the art of both fiction and nonfiction: how to craft language with feeling and vision, employ altered states of mind to access the writing trance, clear your work by recognizing the powerful sway of clichéd thinking and hidden baggage, and intentionally generate duende--that physical/emotional response to art that gives you chills, opens up unrecognized aspects of reality, or simply resonates in your soul. Covering some very practical aspects of writing such as layering and word symmetry, the author also explores the inner world of publishing--what you really will encounter when you become a writer. He then shows how to develop a powerful and engaging book proposal based on understanding the proposal as a work of fiction--the map is never the territory, nor is the proposal the book that it will become.

This book, written using all the techniques discussed within it, offers a powerful, experiential journey into the heart of writing. It does for nonfiction what John Gardner’s books on writing did for fiction. It is one of the most significant works on writing published in our time.
Stephen Harrod Buhner is an Earth poet and the award-winning author of ten books on nature, indigenous cultures, the environment, and herbal medicine. He comes from a long line of healers including Leroy Burney, Surgeon General of the United States under Eisenhower and Kennedy, and Elizabeth Lusterheide, a midwife and herbalist who worked in rural Indiana in the early nineteenth century. The greatest influence on his work, however, has been his great-grandfather C.G. Harrod who primarily used botanical medicines, also in rural Indiana, when he began his work as a physician in 1911.

Stephen's work has appeared or been profiled in publications throughout North America and Europe including Common Boundary, Apotheosis, Shaman's Drum, The New York Times, CNN, and Good Morning America. www.gaianstudies.org
"Ensouling Language is Stephen Harrod Buhner at his most spellbinding and enchanted. Every sentence is infused with a livingness that is rare in today's nonfiction. More than simply a book about writing, it is about wielding power--and responsibility--of language itself. Stephen encourages us to breathe the Breath of Life into the words we write, to call forth such a deep richness of meaning that it transmits feeling from the writer to the reader like some otherworldly telepathy. If you can feel you can write, write in this way, turning otherwise empty leaden words into golden Ensouling Language."
— Daniel Vitalis, June 2010

"Buhner's book describes how any writer, even one writing about, say, adobe walls, can achieve the sense of expansion--of traveling into larger worlds--that has always marked the best art. And although the subject is nonfiction, what Buhner has to say applies to serious writing of any kind."
— Akshay Ahuja, The Occasional Review, May 2010

“The most subversive book on writing I have ever encountered--and the most important.”
— Herbie Brennan, New York Times bestselling author of Faerie Wars

“If Lao-tzu and Emerson could have a dialogue on writing, they would welcome the company of this remarkable book.”
— William Howarth, author of Walking with Thoreau

“Stephen Harrod Buhner has produced a manifesto and guide to bring American writing back from the cages of the academy and release the power of language into the streets and wildernesses where the wild things live. If you love to read, if you like to write, you have finally come to the right place.”
— Charles Bowden, author of Murder City, recipient of the Lannan Literary Award for Nonfiction and the

“Stephen Buhner’s Ensouling Language invites you to sit down for 23 cups of coffee and talk about the mystic journey of the writer, the solitary pilgrim, the witness yearning to tell the world indelible stories that cannot be known by any other voice than yours. If you are a teacher, a writer, a friend of a writer, this book will offer companionship in this life quest. This book harvests lessons from a writer and helpless lover of books who is old in experience but young in perennial devotion.”
— Kim Stafford, director of Northwest Writing Institute and William Stafford Center, Lewis & Clark Col

“Ensouling Language is a fierce and generous meditation on the writer’s life. Fierce, because Stephen Buhner goes right at prevailing commercial and academic assumptions about literature. For him, writing is above all a portal into vividness, compassion, and discovery. Generous, because he weaves his own quest as a writer into his reflections about the art of nonfiction. Books, in both the reading and the writing, have absorbed him for a lifetime. And the connections he conveys here are always arresting, sometimes extravagant in their intensity, and very often funny. As a writer and a teacher, I’ve learned more from Buhner’s book than from anything I’ve read about writing since the works of John Gardner and William Stafford. I’m truly grateful to him for having written it.”
— John Elder, Professor and Director of Breadloaf School of English, Middlebury College, and author of

“I can’t easily imagine a more useful book on the craft of writing. Covering all the steps--from glimpsing a first, furtive idea foraging in the mind’s brambles to tracking that idea and coaxing it to unfurl on the page, from finding the right words to securing the right publisher--this volume also, in the process, transforms your take on the universe. For Buhner brings all his inspired lunacy to bear, illustrating his passionate insights with lively stories and poems and with glimmering nuggets from other authors, fashioning this instructive, how-to book into a breathing compendium of word magic.”
— David Abram, author of Becoming Animal: An Earthly Cosmology and The Spell of the Sensuous, winner o

"Provocation is Buhner's mission in this unusually passionate and delving writer's guide. The author of books about plants, healing, indigenous culture, and the environment, Buhner not only tackles the art of writing with conviction, vigor, expertise, and a touch of devilry but also outspokenly advocates for the maligned form of "genre nonfiction.". . . Buhner sagely covers technical matters and the pragmatic business of book proposals and such, albeit not without lambasting corporate publishing. But his is a heroic view of writing."
— Donna Seaman, Booklist, September 2010

“Stephen Buhner writes with passion and perception about the entire range of the writer’s experience. He shows us in detail how to write, issues of craft and art, but also how a writer lives--the commitment, the dreaming, the business, the way a writer uncovers secrets on many levels, even how a writer loves and hates.”
— Rachel Pollack, author of Godmother Night, recipient of the World Fantasy and the Arthur C. Clarke a

“Stephen Harrod Buhner has counted ‘beacoup coups’ in penning Ensouling Language. As history almost unanimously attests, writing well about writing is at best a rarity, perhaps mythic, a yeti of sorts. But Buhner’s flair, sage advice, and most of all his passion for writing touches every sentence. The book brings writing to life and will add life to any author’s own words.”
— David Cremean, past president, Western Literature Association

“If you want a kind of deep ecology for nonfiction writing, a practical guide ingrained with the spirits of William Stafford and Federico García Lorca too, Ensouling Language is your book. Its pages, studded with samples and suggestions, come via the author’s fresh and liberating voice, opening up the ‘imaginal world’ we cannot do without.”
— John Felstiner, professor of English, Stanford University, and author of Can Poetry Save the Earth?

"For readers and writers who are tired of hearing the same advice that writing instructors and editors have been handing down through the ages, however, Buhner's mystical (some might say touchy-feely) approach to writing may well be what the doctor ordered."
— Small Press Review, September 2010

" . . . Ensouling Language is an important book that encourages inner reflection before and during writing as well as focusing on the feelings of the reader. The technical proponents of publishing are addressed and intertwined throughout giving the writer a glimpse into the 'heart of writing'."
— Irene Watson, Reader Views, October 2010

“Ensouling Language is a richly engaging book written for everyone who has been deeply touched by something they have read and wishes to write like that too.”
— East West Bookshop, April 2011

“The American writer, Stephen Harrod Buhner, author of the iconic Ensouling Language: On the Art of Non-fiction and the Writer’s Life - and an inspiration to our editors - also appeals for openness to these wellsprings of creativity. He challenges the arid and mechanical quality of much non-fiction writing, and the danger of much creative writing being afflicted in the same way, because of the formulaic teaching on American MFAs in particular. For Buhner, as for Edward Bond, there is urgent need in our time of writing, in any genre, that - to adapt Buhner’s own words - attempts to extend awareness “further than society wants it to go” - a view strongly endorsed by our editors.”
— The Lampeter Review, May 2011

“Writing as a mystical experience, a transcendent art-form, is presented by Buhner with all the mystery and inspiration of a personal passion. As he writes about the ability of language to take life on the page, so his own writing quickens, transporting the reader to the realms of poetic spirit. This book is both a tribute to the craft of language and example of the same at its most delicate level. Buhner guides the reader through the process of accessing the necessary mind to write from the heart, and he does so from his own heart-felt devotion to the art. It is both a practical hand-book and mystical treatise, instilled with the spirit of many of the subtlest writers, poets and critics whose approach to writing and life brings to mind the faint scent of incense on the still desert plain”
— Jonathan Dawson, Holisitc Network Ireland

“This is a book I can highly recommend, not only for aspiring writers, but for anyone who wants to engage the world deeply and recognizes the value of words in the exchange.”
— Karl Schlotterbeck, The Henge of Keltria

“The point Buhner is making is vital: that whatever genre we’re writing, whether we’re a graduate from an MFA program or not, writers must never dissociate from their feelings or the feeling of their words. Given the passionate spirit in which Ensouling Language was written, it is sure to resonate with many readers, and is certainly worth a read by anyone who wishes to become a published author.”
— Lisa McSherry, Facing North, October 2013