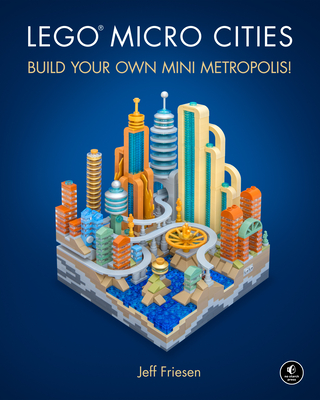 
Usually Ships in 1-5 Days
Create your own custom city with building instructions for over 50 builds from 8 amazing LEGO Micro Cities!

Build a beautiful LEGO® city that's small enough to hold in your hands! Filled with striking photos, step-by-step instructions, and countless ideas for customization, LEGO Micro Cities shows you how building small can open up new possibilities for the creative builder. You'll learn everything you need to know to create your own micro city, from building the foundation to adding convincing architectural details that will bring your city to life.
Jeff Friesen is an award-winning photographer and LEGO enthusiast whose work has been exhibited in the United States, Canada, Europe, and Japan. In 2017, he was awarded the Brothers Brick LEGO Creation of the Year. He posts his popular LEGO photography on Instagram (@jeff_works). Friesen lives in Victoria, British Columbia, Canada.
"This book is a LEGO dreamer’s dream on a very small scale."
—GeekDad

"Building on such a scale is a challenge on its own, but making whole cityscapes? It’s LEGO art at its finest."
—Brick Pals

"I really love all the great details he includes in his cities . . . it really kicks up your microscale city build from good to great."
—Adam's Brick Junction