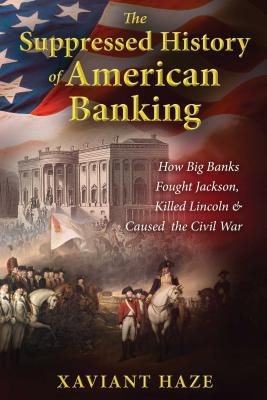 • Details Andrew Jackson’s anti-bank presidential campaigns, his war on Rothschild agents within the government, and his successful defeat of the Central Bank

In this startling investigation into the suppressed history of America in the 1800s, Xaviant Haze reveals how the powerful Rothschild banking family and the Central Banking System, now known as the Federal Reserve Bank, provide a continuous thread of connection between the War of 1812, the Civil War, the financial crises of the 1800s, and assassination attempts on Presidents Jackson and Lincoln.

The author reveals how the War of 1812 began after Congress failed to renew a 20-year charter for the Central Bank. After the war, the ensuing debt forced Congress to grant the central banking scheme another 20-year charter. The author explains how this spurred General Andrew Jackson--fed up with the central bank system and Nathan Rothschild’s control of Congress--to enter politics and become president in 1828. Citing the financial crises engineered by the banks, Jackson spent his first term weeding out Rothschild agents from the government. After being re-elected to a 2nd term with the slogan “Jackson and No Bank,” he became the only president to ever pay off the national debt. When the Central Bank’s charter came up for renewal in 1836, he successfully rallied Congress to vote against it.

The author explains how, after failing to regain their power politically, the Rothschilds plunged the country into Civil War. He shows how Lincoln created a system allowing the U.S. to furnish its own money, without need for a Central Bank, and how this led to his assassination by a Rothschild agent. With Lincoln out of the picture, the Rothschilds were able to wipe out his prosperous monetary system, which plunged the country into high unemployment and recession and laid the foundation for the later formation of the Federal Reserve Bank--a banking scheme still in place in America today.
Xaviant Haze is a researcher of ancient manuscripts and alternative history, exploring and documenting his findings on lost cities and the myths of the pre-diluvian world. The coauthor of The Suppressed History of America, he lives in Arizona.
“I can say with enthusiasm that this is one of the best high overviews of the subject I have read.”
— Joseph P. Farrell, author ofBabylon's Banksters

“Excellent history and research by Xaviant Haze. It is rare to find someone who takes the time to discover true history. This book puts so much into perspective. I am grateful to Xaviant for bringing all of this information to public knowledge.”
— Stewart A. Swerdlow, cofounder of Expansions.com, researcher, lecturer, and author of True World His

The old adage "follow the money" rings true in this second book in the Suppressed History series by Xaviant Haze (the first with co-author Paul Schrag). The theme running through is the role of the powerful Rothschild banking family from the post–American Revolution days to the end of the Civil War. From working behind the scenes with King George III to funding the 1812-14 war on America, fomenting economic crises and sponsoring both sides of the Civil War, the Rothschilds went all out to get their own way.
Yet this is also the story of those who stood up to them. Andrew Jackson, for example, was elected President in 1828 and spent his early days in office weeding out Rothschild agents. In 1835, as Jackson fought the Second Bank of America, the Rothschild family paid a mentally unstable man to assassinate him, but the bid failed. In 1865, another Rothschild hired hand, the actor John Wilkes Booth, succeeded in assassinating President Lincoln who had riled the banking family by having state banks issue "greenbacks". The Rothschilds, Haze writes, conspired to destroy what was a successful monetary system, creating yet another recession and exerting more control over the people.
The sub-theme of Haze's book is the discovery over the decades of giant skeletons, reported in the press of the day, and the interest of several Presidents in the subject. It's an intriguing book with a treasure-trove of archival images.
— Nexus