DNA of the Gods: The Anunnaki Creation of Eve and the Alien Battle for Humanity (Paperback) 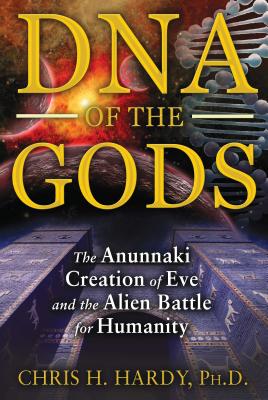 DNA of the Gods: The Anunnaki Creation of Eve and the Alien Battle for Humanity (Paperback)

• Explains the genetic engineering of humanity by an Anunnaki scientist Ninmah

• Shows how the concepts of sin and the inferiority of women arose from Enlil’s will to keep humanity underdeveloped, clashing with Enki’s and Ninmah’s plan to make us equal in intelligence

Further developing the revolutionary work of Zecharia Sitchin, Chris Hardy shows that the “gods” of ancient myth, visitors from the planet Nibiru, created us using their own “divine” DNA--first through DNA extraction from their own ribs’ marrow and later by direct relations with early human females. Drawing upon multiple sacred texts, Hardy details the genetic engineering of humanity by Anunnaki scientist Ninmah, with the help of Enki and Hermes. She reveals how Ninmah’s first female human creation, Tiamat/Eve, contained more alien DNA than the earlier male one, Adamu, and how the biblical Noah represents the perfection of her work.

Examining the war between Anunnaki brothers Enki and Enlil, Hardy reveals how the concepts of sin and the inferiority of women were born out of Enlil’s attempts to enslave and then wipe out humanity, repeatedly thwarted by Enki and Ninmah. The author further explains how the sacred sexuality taught to humans--still seen in Tantric practice--became suppressed millennia later by the patriarchal concept of original sin and how innocent Eve took the blame for the expulsion from Eden and fall from Grace.

Showing that the god who created us was not the same god who expelled us from Eden, Hardy explains that there will be no apocalypse because the Good/Evil duality has never truly existed--it has been only enemy gods fighting and implicating humanity in the wake of their own competition for power. With a full psychological understanding of how the ancient “gods” have shaped humanity’s ongoing history of conflict, we can move beyond the framework of “(my) Good versus (your) Evil” imposed by Enlil and begin to steer our own planetary destiny.
Chris H. Hardy, Ph.D., holds a doctorate in ethno-psychology. A cognitive scientist and former researcher at Princeton’s Psychophysical Research Laboratories, she has spent many years investigating nonlocal consciousness through systems theory, chaos theory, and her own Semantic Fields Theory. The author of many research papers and published books, including DNA of the Gods and The Sacred Network, she lives in France.
“Some of the strangest theories are also the most fascinating, especially if they involve human nature and deep mysteries from the ancient past. Anyone who thinks they really understand reality doesn’t have a clue. Enjoy this thoughtful and creative exploration of human origins and what it is to be us.”
— Allan Leslie Combs, Ph.D., doshi professor of consciousness studies and director at CIIS Center for

“We need writers like Chris Hardy to give us space to think beyond the pale; to draw us into the unknown and challenge our assumptions. To read her work is to realize how mundane the life of the mind may be for the rest of us who may not be brave enough to explore the meaning of our ancient dreams. She is chasing the shadows of our humanity and for that we can be grateful.”
— Linda F. Dennard, Ph.D., professor of public policy and international relations at Auburn University

“In this thought-provoking and remarkable book, Chris Hardy illustrates the way the role of women in societal development has been marginalized in modern times. She uses ancient mythological accounts that demonstrate that a more equitable and more feminist approach was once in vogue but was eclipsed when male-dominated writers co-opted recorded history. Hardy couples this well-founded assertion with the provocative suggestion that human evolution was given a jumpstart by extraterrestrial agencies. Readers may agree or disagree with Hardy, but they will never be bored as they wend their way through DNA of the Gods.”
— Stanley Krippner, Ph.D., coauthor of Personal Mythology and Becoming Psychic

“Excellently researched and easy to read, this book honors the work of Zecharia Sitchin with updated science and philosophies proving ancient man was genetically manipulated by an alien hand.”
— Xaviant Haze, author of Aliens in Ancient Egypt and coauthor of The Suppressed History of America