Quantum Revelation: A Radical Synthesis of Science and Spirituality (Paperback) 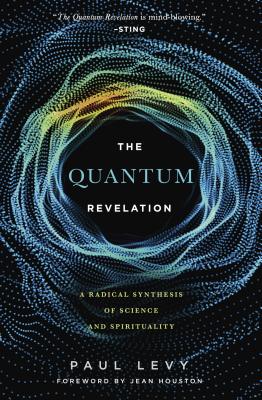 Quantum Revelation: A Radical Synthesis of Science and Spirituality (Paperback)

"The Quantum Revelation is mind-blowing." —Sting To say that quantum physics is the greatest scientific discovery of all time is not an exaggeration. In their discovery of the quantum realm, the physics community stumbled upon a genuine multifaceted revelation which can be likened to a profound spiritual treasure—a heretofore undreamed of creative power—hidden within our own mind. Quantum physics unequivocally points out that the study of the universe and the study of consciousness are inseparably linked, which is to say that ultimate progress in the one will be impossible without progress in the other. Einstein declared that what it reveals is so immensely important that “it should be everyone’s concern.” Yet few of us in the general public truly understand how the game-changing discoveries of the past century not only relate to our day-to-day lives, but also give us insights into the nature of reality and our place within it. Written for readers with no physics background, Paul Levy’s latest book, The Quantum Revelation: A Radical Synthesis of Science and Spirituality is for those who have heard that quantum physics is a fascinating subject but don’t quite understand how or why. Levy contemplates the deeper philosophical underpinnings of quantum physics, exploring the fundamental questions it provokes: What does it mean that quantum theory has discovered that there is no such thing as “objective reality?” How are we participating—via our consciousness—in creating our experience of a reality that quantum theory itself describes as “dreamlike?” What are the implications for us in our day-to-day lives that—as quantum theory reveals—what we call reality is more like a dream that we had previously imagined? The Quantum Revelation is unique in how it synthesizes science and spirituality so as to reveal and explore the dreamlike nature of reality. It is a book not just for people interested in quantum theory, but for anyone who is interested in waking up and dreaming lucidly, be it in our night dreams or our waking life.

Jean Houston, Ph.D., scholar, philosopher and researcher in Human Capacities, is one of the foremost visionary thinkers and doers of our time. She is long regarded as one of the principal founders of the Human Potential Movement.  Dr. Houston is noted for her ability to combine a deep knowledge of history, culture, new science, spirituality and human development into her teaching.  She is known for her inter-disciplinary perspective delivered in inspirational and humorous keynote addresses.

A prolific writer, Dr. Houston is the author of 26 books including “Jump Time”, “ A Passion for the Possible”, “Search for the Beloved”, “Life Force”, “The Possible Human”, “Public Like a Frog”, “A Mythic Life: Learning to Live Our Greater Story”, and “Manual of the Peacemaker”.

As Advisor to UNICEF in human and cultural development, she has worked around the world helping to implement some of their extensive educational programs.  In September of 1999, she traveled to Dharamsala, India as a member of a group chosen to work with the Dalai Lama in a learning and advisory capacity. Dr. Houston has also served in an advisory capacity to President and Mrs. Clinton as well as assisting Mrs. Clinton in her writing of her book, “It Takes A Village: And Other Lessons Children Teach Us”.  She has met with President and Mrs. Carter, and with leaders in many countries and cultures.  As a high school student she worked closely with another First Lady of the United States, Eleanor Roosevelt, in developing strategies to introduce international awareness and United Nations work to young people.

Since 2003, she has been working with the United Nations Development Program, training leaders in human and cultural development as well as in Social Artistry, a community-leadership training program that she developed.  Together with other international agencies and companies, over the last 45 years, Dr. Houston has worked in over 100 countries.

In 1965, along with her husband Dr. Robert Masters, Dr. Houston founded The Foundation for Mind Research. She is also the founder and principal teacher, since 1983, of the Mystery School, now called the Renaissance of Spirit, a school of human development, a program of cross-cultural, mythic and spiritual studies, dedicated to teaching history, philosophy, the New Physics, psychology, anthropology, and the many dimensions of human potential.

In 2008, the Jean Houston Foundation was formed to teach Social Artistry in the United States and overseas.  This training has been conducted in Albania, the Eastern Caribbean, Kenya, Zambia, Nepal, and the Philippines.

Jean Houston holds a B.A. from Barnard College, a Ph.D. in psychology from the Union Graduate School and a Ph.D. in religion from the Graduate Theological Foundation. She has also been the recipient of honorary doctorates.

In 1981, due to an intense personal trauma, Paul Levy had a life-changing spiritual awakening in which he began to recognize the dreamlike nature of reality. During the first year of his spiritual emergence, Paul was hospitalized a number of times and was told he was having a severe psychotic break from reality. Fortunately, he was able to extricate himself from the medical and psychiatric establishment so that he could continue his process of self-discovery. In the late 1980s he became the manager of the C. G. Jung Foundation Book Service in New York, as well as the advertising manager for the Jungian journal Quadrant. He later moved to Portland, Oregon, where he began sharing his ideas about the dreamlike nature of reality by giving talks and facilitating interest groups. Paul is the author of Dispelling Wetiko: Breaking the Curse of Evil, Awakened by Darkness: When Evil Becomes Your Father, and The Madness of George W. Bush: A Reflection of Our Collective Psychosis. A Tibetan Buddhist practitioner for more than thirty years, Paul has intimately studied with some of the greatest spiritual masters of Tibet and Burma. Paul is the founder of the Awakening in the Dream community in Portland, Oregon. He was also the coordinator of the Portland chapter of the Padmasambhava Buddhist Center for over twenty years.