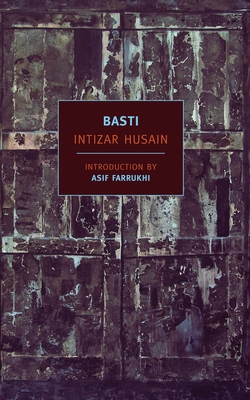 
Email or call for price
An NYRB Classics Original

Basti is a beautifully written reckoning with the tragic history of Pakistan. Basti means settlement, a common place, and Intizar Husain’s extraordinary novel begins with a mythic, even mystic, vision of harmony between old and young, man and woman, Muslim and Hindu. Then Zakir, the hero, wakes to the modern world. Crowds gather. Slogans echo. Cities burn. Whether hunkered down with family or furtively meeting to exchange news with friends in cafés, Zakir is alone in a country lost to the politics of loneliness.
Intizar Husain (1925–2016) was a journalist, short-story writer, and novelist, widely considered one of the most significant fiction writers in Urdu. Born in Dibai, Bulandshahr, in British-administered India, he migrated to Pakistan in 1947 and lived in Lahore. Besides Basti, he was the author of two other novels, Naya Gar (The New House), which paints a picture of Pakistan during the ten-year dictatorship of the Islamic fundamentalist General Zia-ul-Haq, and Agay Sumandar Hai (Beyond Is the Sea), which juxtaposes the spiraling urban violence of contemporary Karachi with a vision of the lost Islamic realm of al-Andalus. Collections of Husain’s celebrated short stories have appeared in English under the titles Leaves, The Seventh Door, A Chronicle of the Peacocks, and An Unwritten Epic.

Frances W. Pritchett has taught South Asian literature at Columbia University since 1982. Her books include Nets of Awareness: Urdu Poetry and Its Critics, The Romance Tradition in Urdu: Adventures from the Dastan of Amir Hamzah, and (with Khaliq Ahmad Khaliq) Urdu Meter: A Practical Handbook.

Asif Farrukhi is a writer and a physician trained in public health. He is a frequent contributor to the English-language press of Pakistan and the author of seven short-story collections, two essay collections, and a monograph on Intizar Husain. He is the editor of Fires in an Autumn Garden: Stories from Pakistan, Look at the City from Here: Writings About Karachi, and co-editor of Faultlines, a selection of stories about the 1971 Indo-Pakistani war, and has collaborated with Intizar Husain on the anthology Short Stories from Pakistan.
“In graceful prose, Husain conjures the unceasing wonders of early childhood and the social rhythms of small-town life.” —Ratik Asokan, The Nation

“This brilliant novel from Intizar Husain, one of South Asia’s greatest living writers, should finally end the scandal of his relative obscurity in the West.” —Pankaj Mishra

“Intizar Husain is the most important writer of fiction in Urdu, the strangely homeless language produced out of interactions between the vernacular of north India and those of the Islamic Near East, Persian and Arabic in particular. In Basti he has produced a novel of epic ambition: a swirling storm of historical moments, scriptural traditions, and ancient mythologies, all harnessed around the convulsion of India’s partition along religious lines. By taking us through the internal life of his protagonist, Zakir—‘He who remembers’—Husain performs an act of civilizational memory and provides us with the fragments of a culture’s history that modernity has firmly set on the road to oblivion.” —Aamir R. Mufti

“The uncharitable might say that but for the past, Intizar Husain would not have had a future. But truth to tell, the man who blends the personal with the impersonal, specific with the universal, actually has the past much to thank for. Be it drawing generously from the Jataka tales or the Panchatantra fables or even the layered Shiite tradition or the more modern existentialism, his tomorrows have been taken care of by yesterdays. Yet Intizar Husain does not live in the past, so much as he draws from it. His nostalgia is not comforting, there is that disquiet air that runs through his works, and Basti, arguably the finest novel on Partition, is no different. Distance in time often diminishes emotion, but in Husain's case it only serves to distil it: what goes away is the peripheral, what is retained is the essential.” —The Hindu