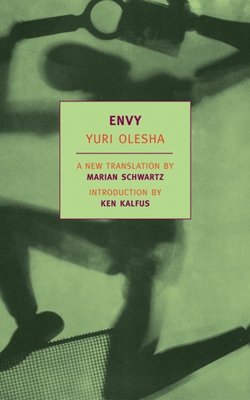 By Yuri Olesha, Ken Kalfus (Introduction by), Marian Schwartz (Translated by)
$14.95
Email or call for price

One of the delights of Russian literature, a tour de force that has been compared to the best of Nabokov and Bulgakov, Yuri Olesha's novella Envy brings together cutting social satire, slapstick humor, and a wild visionary streak. Andrei is a model Soviet citizen, a swaggeringly self-satisfied mogul of the food industry who intends to revolutionize modern life with mass-produced sausage. Nikolai is a loser. Finding him drunk in the gutter, Andrei gives him a bed for the night and a job as a gofer. Nikolai takes what he can, but that doesn't mean he's grateful. Griping, sulking, grovelingly abject, he despises everything Andrei believes in, even if he envies him his every breath.

Producer and sponger, insider and outcast, master and man fight back and forth in the pages of Olesha's anarchic comedy. It is a contest of wills in which nothing is sure except the incorrigible human heart.

Yuri Olesha (1899–1960), the son of an impoverished land-owner who spent his days playing cards, grew up in Odessa, a lively multicultural city whose literary scene also included Isaac Babel. Olesha made his name as a writer with Three Fat Men, a proletarian fairy tale, and had an even greater success with Envyin 1927. Soon, however, the ambiguous nature of the novella’s depiction of the new revolutionary era led to complaints from high, followed by the collapse of his career and the disappearance of his books. In 1934, Olesha addressed the First Congress of Soviet Writers, arguing that a writer should be allowed the freedom to choose his own style and themes. For the rest of his life he wrote very little. A memoir of his youth, No Day Without a Line, appeared posthumously.

Ken Kalfus’s most recent book is a novel, The Commissariat of Enlightenment. He is also the author of two short story collections, Thirst and Pu-239 and Other Russian Fantasies.

Marian Schwartz has been translating Russian fiction and nonfiction for over thirty years. Her work includes Edvard Radzinsky’s The Last Tsar, Yuri Olesha’s Envy, and many works by Nina Berberova.

“In his best novel, all wry humor and narrowed eyes, Olesha presents two sides of the same coin: a self-satisfied sausage king and a drunken failure the former picks up in the street. Poetic and satiric and quite an achievement, it is a novel everyone should read.” —Flavorwire

Olesha wrote only one novel, Envy. The book was published in 1927, 10 years after the Bolshevik Revolution and a few years before the net of socialist realism fell on Russian writers….The narrative is driven by the narrator’s bitter, poetic commentary on the world. The characters represent, loosely, aspects of the new Soviet ethos. Vladimir Nabokov had a low opinion of almost everything produced in Russia after his departure, but he admired Olesha’s writing.
— Columbus Dispatch

In his best fiction, the short novel Envy, Olesha writes about the clash of two worlds, but with a wry, half-defeated yet touchingly affectionate irony that seems entirely his own.
— Irving Howe, Harper’s

Olesha’s stories are supreme and timeless cinema. To read his triumphant short novel Envy is to see it, to find the pages transformed into a screen on which to behold man’s heroic confrontation with the monsters of his own creation…Every page of Olesha demands to be read and seen again.
— The New York Times