Ask the Astronaut: A Galaxy of Astonishing Answers to Your Questions on Spaceflight (Paperback) 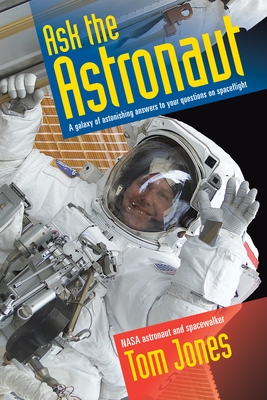 Ask the Astronaut: A Galaxy of Astonishing Answers to Your Questions on Spaceflight (Paperback)


Usually Ships in 1-5 Days
Ever wondered what space is really like? Thanks to his 25 years of training for, flying in, consulting on, and writing and speaking about space, astronaut and spacewalker Tom Jones can answer that question and many others. What do you feel on liftoff? What is weightlessness? Where do you sleep in space? Can you see the Great Wall of China? Jones answers every question you have ever had about space in Ask the Astronaut. His entertaining blend of wit, personal experience, and technical expertise shines in each answer, and together all the answers illuminate the true space experience from start to finish. His engaging and informative responses remind readers of historic space achievements, acquaint them with exciting new ambitions, make them feel like they have experienced space firsthand, and even inspire an urge to explore space themselves. Jones covers everything from the training process for new astronaut candidates and the physical sensations and challenges of rocketing into orbit to what it's like to live, work, and walk in space. Jones also explores the future of spaceflight, both professional and commercial, in the years to come. Ask the Astronaut is a delight for all readers, especially "armchair astronauts" and younger, 21st century space explorers.
Tom Jones is a planetary scientist, space consultant, professional speaker, and veteran astronaut who completed four space shuttle missions and three spacewalks. Jones has authored six books, including Sky Walking: An Astronaut's Memoir, and he writes for aerospace magazines such as Air & Space Smithsonian, Aerospace America, Popular Mechanics, and The Planetary Report. A senior research scientist for IHMC, he appears regularly on television news as an expert commentator for space exploration and science stories.
SCHOOL LIBRARY JOURNAL
The former space shuttle astronaut and planetary scientist has written a treasure trove of answers to FAQs about modern space flight. The text is well organized, with questions categorized into chapters that explain the different steps in the process of aspiring to, training for, and living and working in space. Jones answers scores of questions that he has received over the years at public forums, from “Where should we send astronauts next in space?” to “Have astronauts ever seen space aliens?” Most of the book focuses on NASA’s space shuttle voyages to the International Space Station, because this is Jones’s greatest area of experience as an astronaut. The technical descriptions in the answers are a bit complex, but the firsthand details and comprehensive back matter make this an ideal addition to any junior high or high school library. VERDICT A fascinating look at space travel that will excite budding STEM students.–Kelly Kingrey-Edwards, Blinn Junior College, Brenham, TX


KIRKUS REVIEWS
A veteran astronaut weighs in on queries ranging from how the universe began to how to pee in a spacesuit. The hundreds of questions are grouped in broadly topical chapters but otherwise arranged in no particular order. They cover an astronaut's qualifications, training, and work; what it feels like to travel into space and to live there; the nature of the universe and our near-future prospects for exploring it. Jones draws on his experiences on four space shuttle flights between 1994 and 2001 for his answers, which are usually fairly lengthy, though he plainly leaves a few things out: if "NASA astronauts wait an average of five years between missions," why were his so much closer together? Will he ever go to space again? "Not if I want to stay married." Still, he often drills down to the nitty-gritty: what's in the International Space Station's tool kit? A long list, beginning with vise grips and including "a crowbar, a fiber optic boroscope, torque tip drivers." He doesn't trumpet personal opinions, but they can be found in lukewarm responses to questions about space camp and space tourism, as well as a cogent argument for continuing our exploration of the high frontier: "We will be struck again by an asteroid." Plenty of small space photos and snapshots of the author and other astronauts at work and play are interspersed. Fine browsing for space geeks. (Nonfiction. 11-14)