Who Gets What: Fair Compensation after Tragedy and Financial Upheaval (Hardcover) 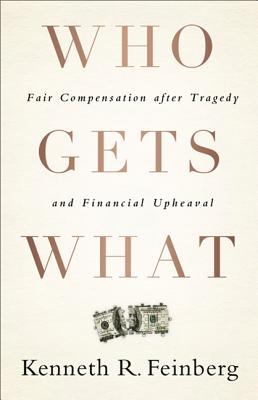 Who Gets What: Fair Compensation after Tragedy and Financial Upheaval (Hardcover)


Usually Ships in 1-5 Days
Agent Orange, the 9/11 Victim Compensation Fund, the Virginia Tech massacre, the 2008 financial crisis, and the Deep Horizon gulf oil spill: each was a disaster in its own right. What they had in common was their aftermath -- each required compensation for lives lost, bodies maimed, livelihoods wrecked, economies and ecosystems upended. In each instance, an objective third party had to step up and dole out allocated funds: in each instance, Presidents, Attorneys General, and other public officials have asked Kenneth R. Feinberg to get the job done.

In Who Gets What?, Feinberg reveals the deep thought that must go into each decision, not to mention the most important question that arises after a tragedy: why compensate at all? The result is a remarkably accessible discussion of the practical and philosophical problems of using money as a way to address wrongs and reflect individual worth.
Kenneth R. Feinberg, one of the nation's leading lawyers, has been front and center in some of the most complex public legal disputes of the past three decades: Agent Orange, asbestos, the closing of the Shoreham Nuclear Plant, and now, 9/11. A former prosecutor and member of two Presidential Commissions, he is also adjunct Professor of Law at Georgetown University, the University of Pennsylvania, Columbia University, and New York University. He lives in Washington D.C.
“An interesting prism through which to view what kind of lives and livelihoods our democracy sees fit to value… This peek into a world 99 percent of us will never experience is perhaps the most powerful lesson of Feinberg's book. It reveals how our society's values have been radically skewed to greatly reward those who take excessive risks in creating impenetrable 'vehicles' that have almost no intrinsic societal value.”

Eric Posner, New Republic on line
“A helpful reminder that many institutions that we take for granted flourish only because the public does not pay attention to them. When political ruptures expose this machinery, savvy figures such as Kenneth Feinberg are called upon to play a paradoxical role. They convince the public that these institutions are fair by temporarily suspending their operation and using ad hoc procedures that better comport with public notions of fairness, until public attention wanders elsewhere.

Kirkus Reviews
“An insider's account of how compensation decisions are made after major disasters…An opportunity to get to know a man whose work has affected thousands.”

Newsweek Daily Beast“When bad things happen and damages are due, it has frequently fallen on Washington lawyer Kenneth Feinberg to decide how much cash goes to whom—thus his unlikely career as America's King Solomon.” Washington Post“A clearly written and emotionally contained new book”

Washington Post
“In Who Gets What,” lawyer and master of disaster Kenneth R. Feinberg dissects the complicated business of settling claims after calamity… A glance at recent headlines may indicate a long shelf life for Feinberg's book — who will compensate the victims of Jerry Sandusky? “Who Gets What” indeed."