Enough Is Enough: How Students Can Join the Fight for Gun Safety (Paperback) 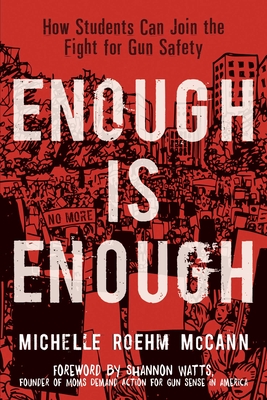 Enough Is Enough: How Students Can Join the Fight for Gun Safety (Paperback)


Email or call for price
From award-winning author Michelle Roehm McCann comes a young activist’s handbook to joining the fight against gun violence—both in your community and on a national level—to make schools safer for everyone.

Young people are suffering the most from the epidemic of gun violence—as early as kindergarten students are crouching behind locked doors during active shooter drills. Teens are galvanizing to speak up and fight for their right to be safe. They don’t just want to get involved, they want to change the world. Enough Is Enough is a call to action for teens ready to lend their voices to the gun violence prevention movement. This handbook deftly explains America’s gun violence issues—myths and facts, causes and perpetrators, solutions and change-makers—and provides a road map for effective activism.

Told in three parts, Enough Is Enough also explores how America got to this point and the obstacles we must overcome, including historical information about the Second Amendment, the history of guns in America, and an overview of the NRA. Informative chapters include interviews with teens who have survived gun violence and student activists who are launching their own movements across the country. Additionally, the book includes a Q&A with gun owners who support increased gun safety laws.
Michelle Roehm McCann has worked as a children’s book editor and art director for more than twenty years, as well as writing and compiling several award-winning children’s books of her own. She lives in Portland, Oregon, with her husband, two world-rocking kids, and their brilliant cats, Horace and Percy.

A handbook explaining why and how readers can do their parts to end gun violence. This is a substantive look at the causes of the serious epidemic of gun violence in America and a how-to manual for making positive changes to create safer schools and communities. Using well-researched facts, this book dispels the myth that nothing can be done. Topics covered include the impact of gun violence on marginalized communities (systemic racism and structural violence, Black Lives Matter, hate crimes), the history of the National Rifle Association, strategies and policies in states that are successfully combating gun violence, and information about gun control in other developed countries. Standout graphics and images as well as informative graphs and maps and a mixture of eye-catching fonts keep readers' attention and make the data easier to absorb and remember. Profiles of activists, many of them teens who have been directly affected by gun violence—and even a few gun owners who advocate for responsible gun ownership—at the end of each chapter place a human face on the epidemic. Most usefully, the book contains detailed strategies for taking action, beginning with the foreword by Shannon Watts, founder of Moms Demand Action. While the harrowing stories and facts will make an impact, this book ultimately seeks to empower young people. Will give readers tools for combating a problem that leaves many feeling helpless. (resources, gun glossary, notes) (Nonfiction. 13-18)
— Kirkus Reviews

“America is the gun-craziest country in the world,” McCann writes passionately in her deeply researched and highly informative book about guns in America. The statistics she cites are staggering: e.g., a total of 1,297 American children are killed by guns each year; 5,790 more are injured; gun violence is the numbertwo killer of young people, second only to car accidents; 31% of all gun deaths and nearly 50% of gun homicides are young people; and there are many more, a number of them presented in the form of numerous charts and graphs. This lively and smoothly written book is replete with sidebar features, as well, including, notably, profiles of student activists like survivors of the Parkland and Sandy Hook shootings. McCann divides her material into four major sections: "The Problems," which focuses on gun violence; "How We Got Here," which features a scathing profile of the NRA; "The Solutions," which examines states with strong gun laws; and "Take Action," which emphasizes things young people can do, including contacting their representatives in Congress and launching boycotts. Clearly McCann’s book is a work of advocacy—a clarion call to action, and she expresses her hope that it will inspire readers to become gun safety activists. One hopes she will succeed.
— Booklist *Starred*

This is one of the most important books to purchase for your library, particular given the large number of mass shootings that have occurred in the United States in recent years. The author does a tremendous job of explaining the issues surrounding gun control and gun violence and provides information about people involved in gun control issues and why they become involved. It provides perspectives from both sides of the issue, as many of the individuals profiled include those who strongly believe in everyone’s right to have a gun, but who believe that doing so should be done with much responsibility. Every piece of information provided is backed up with substantial data, including figures such as the drop in suicide rates and gun deaths with stronger firearm laws being passed in states such as Massachusetts and Oregon. The portion on the 2nd Amendment and the history of the NRA, including how it morphed into such a strong political presence, was intriguing and the bios on victims of people involved in shootings made for a very strong read. The end of the book includes substantial ways for teenagers to become involved in the political process and provides guidelines for how to speak with people about such a controversial issue. This is a book that every library needs on their shelves. Robyn Young, School Librarian, Avon (Indiana) High School

Gr 7 Up–With students becoming more involved in gun control debate and activism, this encompassing and attractively designed overview of the facts, effects, and advice from gun control activists will capture the attention of many teen readers. The acknowledgement that urban gun violence went ignored long before mass shootings began to increase is welcome, as are statistics and detailed explanations of how gun violence uniquely impacts women, the LGBTQ community, and BIPOC. Readers are introduced to teens involved in gun control activism—many of those profiled have either been personally affected by gun violence or are advocating for responsible gun ownership and control. Plenty of charts, graphs, and pullout stats make the content accessible for a variety of readers; information is clearly labeled and doesn’t clutter the pages. Advice on how to advocate for gun control is clear-cut. An account from a teen who grew up in a hunting environment, a mention of Columbine survivor and Colorado state legislator Patrick Neville, who supports arming teachers with guns, and an acknowledgement that the majority of gun owners have guns for non-nefarious purposes are included. Although this title is aimed at teens, adults could also gain insightful information on activism. VERDICT This encompassing guide will be a boon for students eager to become better educated about gun violence and gun control, especially with regard to suggestions on meaningful ways to get involved. A timely, thoughtful, far-reaching, and inclusive look at gun control and gun violence issues. – ­Jennifer Schultz Angoli, Fauquier County Public Library, Warrenton, VA
— School Library Journal STARRED REVIEW