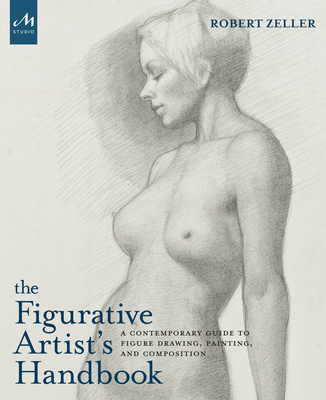 
Email or call for price
An Authoritative, Comprehensive Guide for Contemporary Figurative Artists At a time when renewed interest in figurative art is surging throughout the art world, author Robert Zeller presents The Figurative Artist’s Handbook - the first comprehensive guide to figure drawing and painting to appear in decades.

Original and thoroughly modern in his approach, Zeller brings together three figure-drawing methods long thought to be at odds, synthesizing these seemingly incompatible techniques to achieve a cohesive and complete understanding of the human figure.

Although all three methods underlie contemporary fine-arts practice and education, no artist’s handbook has ever combined them before.
- The Study of Gesture (Disegno): Rooted in the Italian Mannerist style of the 16th and 17th centuries, the gestural method emphasizes life, rhythm, and movement in the human body.
- The Structural Approach: A mainstay of 20th- and 21st-century art instruction, this method applies an architectural perspective to the body, using a block conception for anatomically sound, solid figures.
- The Atelier Method: Based on the training provided by 18th- and 19th-century art academies, the atelier approach creates sensual, smooth renderings based on meticulous study of the figure’s surface morphology in light and shadow.

Covering all the basics as well as many advanced techniques, The Figurative Artist’s Handbook is aimed at both students and experienced artists. A practical, how-to guide, it provides in-depth step-by-step instruction and - rare among figure-drawing books - features sections on composition, portraiture, and painting. Chapters on creativity and on using a sketchbook help readers hone their artistic vision and evolve ideas from the initial inspiration to the fully developed work. Also included is an extensive section highlighting the great movements in figurative art throughout history - from ancient Egypt and Greece to the present.

Robert Zeller is an artist who lives and works in Brooklyn, New York. Originally from New Orleans, Zeller received a BFA from the Boston Museum School and Tufts University and an MFA from the New York Academy of Art. He finished his education with atelier training from Jacob Collins at the Water Street Atelier and in-depth anatomical and structural study with the sculptor Sabin Howard. Zeller is the recipient of two Posey Fellowships and a Pollock-Krasner Foundation Grant and has exhibited at galleries in Los Angeles, Houston, Paris, and New York, where he has had two solo shows. He is the founder of the Teaching Studios of Art (www.teachingstudios.com) in Oyster Bay, New York. For more about the artist, visit www.robertzeller.com.

"Rob Zeller’s debut book on drawing and painting the human figure promises to be one of the most definitive on the subject in decades. Classical, as well as contemporary in scope, it contains images, how-to diagrams, and information about figurative art movements of the past, in addition to profiles of some of the greatest practitioners working today.... The book concludes with a section on artists' painting processes, featuring examples of Zeller’s own work, along with some of the best of his peers, who collectively usher the figurative tradition forward into a new era." - David Molesky, Juxtapoz

"Robert Zeller’s book is a welcome reminder of the ongoing importance of figurative art, and the many masterful figurative artists working today. It is at once a comprehensive, practical guide to the construction of the human body - male or female, standing or reclining, viewed from the front or the back, self-absorbed or expressively gesturing - down to the last anatomical and aesthetic detail, and an informative, incisive, critical account of the history of figurative art, a sort of grand tour of the seemingly infinite variety of modes of representation of the figure. Beginning with the treatment of the figure in ancient Egypt and ending with its treatment in the 21st century, Zeller makes it stunningly clear that the representation of the figure, in whatever stylistic mode, is the bedrock of visual art. The book has encyclopedic breadth and analytic depth, and is beautifully illustrated with drawings and paintings, all presenting the body in one or another of many possible positions and situations, all suggesting that we need the mirror of art to insightfully attune to our own bodies." - Donald Kuspit, Distinguished Professor Emeritus of Art History and Philosophy, State University of New York at Stony Brook

"The Figurative Artist’s Handbook... is a very beautiful book to look through, so it may be challenging for those who use it as a handbook to let it get dirty and dog-eared, just like the previous generation did with their [Andrew] Loomis books. But used as intended - both for reference and for inspiration - it will achieve its purpose. As its gorgeous plates tell us, there is a rising group of figurative artists who know the importance of learning “the rules” before they break them, which is precisely the opportunity this book intends to offer its most ambitious readers." - John Seed, Hyperallergic

“The book brings together three figure-drawing methods - the study of gesture, the structural approach and the atelier method - and synthesizes them to help the artist understand the human figure. Zeller also includes chapters on creativity and on using a sketchbook to take ideas from initial inspiration to a fully developed work… appreciated the book's surprises, including spreads that include not only the finished figurative painting but the preparatory sketches as well.” - Professional Artist