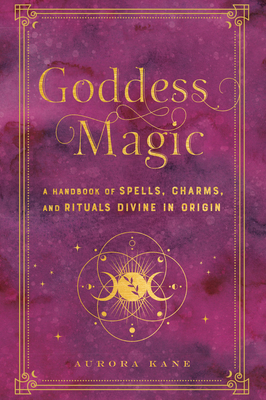 This is book number 10 in the Mystical Handbook series.

Tune into the divine power of Goddess Magic, featuring a directory of deities alongside 50 spells, altars, and exaltations to amplify your highest vibes and attract fulfillment, success, friendship, growth, love, and fortune.

Goddesses, both new and old, will lend their powers to those who seek their favor. Goddess Magic helps you channel divine power while also helping you find your patron deity of choice. Connect with your spiritual heritage and tap into the powers of your ancestors and all the mystical beings around you.

This beautiful handbook contains well-known goddesses from the ancient world famously claimed by witches throughout the ages as well as other, less common ones, like catholic patron saints, around whom specific spells and rituals have grown. Each goddess rules over her domain, protecting and inspiring those who seek her favor with traditional rituals and spells praising her. Her symbols, favorite offerings, and favored forms of worship are all explained in the same illustrated and informative way as the previous books in the series.

Here is but a taste of the powerful patrons you can learn about: The Mystical Handbook series from Wellfleet takes you on a magical journey through the wonderful world of spellcraft and spellcasting. Explore a new practice with each volume and learn how to incorporate spells, rituals, blessings, and cleansings into your daily routine. These portable companions feature beautiful foil-detail covers and color-saturated interiors on a premium paper blend.

Aurora Kane—author of Moon Magic, House Magic, Herbal Magic, and Goddess Magic—is a practicing witch and herbalist with many decades (some say centuries) of experience in casting and conjuring. She lives in the Northeastern United States where she is a founding member of the Coven of the Moonbeam Ravine.