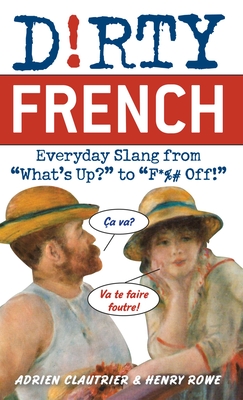 Next time you’re traveling or just chattin’ in French with your friends, drop the textbook formality and bust out with expressions they never teach you in school, including:

Dirty French teaches the casual expressions heard every day on the streets of France:

•Wanna try doggy-style?
Veux-tu faire l'amour en levrette?
Adrien Clautrier in the about the author section: Adrien Clautrier is a self-employed mechanic born and raised in Marseille, France. A motorcycle and automobile enthusiast, he has completed two US coast-to-coast trips, one on a Harley-Davidson and the other in a Cadillac. When he is not in his garage or on the road, he reads nonstop (especially Frédéric Dard’s San-Antonio series) or listens to the stand-up comedies of the late French comedian Coluche.

Henry Rowe left Berkeley to play soccer in France. He never made it out of the amateur ranks but stayed for the used bookstores and Saint-Émilion wine cellars. He currently lives in Ménilmontant in Paris, frequents Mon Chien Stupide, and listens to everything from Serge Gainsbourg to Toulouse’s Jerry Spider Gang.