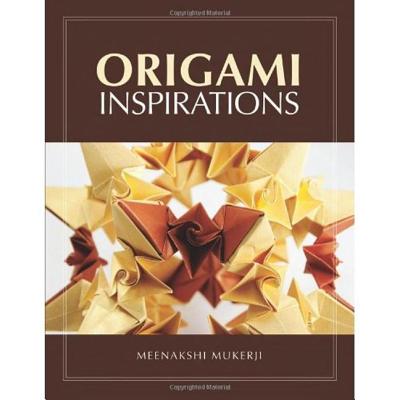 
Email or call for price
This handsome book is aimed towards those with an intermediate skill level, but the origami basics included at the start of the book make it accessible to beginners. A number of beautiful models are offered, ranging from cubes to prisms to dodecahedra. As with the author's two previous books, Origami Inspirations provides step-by-step instructions and color distribution suggestions to create the more than 30 intricate designs presented. The book also includes a chapter featuring designs by origami artists from around the world, and these projects provide a happy complement to the author's own exciting inspirations in the rest of the book.
Meenakshi Mukerji (Adhikari) was introduced to origami in her early childhood by her uncle Bireshwar Mukhopadhyay. She rediscovered origami in its modular form as an adult, quite by chance in 1995, when she was living in Pittsburgh, PA. A friend took her to a class taught by Doug Philips, and ever since she has been folding modular origami and displaying it on her very popular website www.origamee.net. She has many designs to her own credit. In 2005, Origami USA presented her with the Florence Temko award for her exceptional contribution to origami. Meenakshi was born and raised in Kolkata, India. She obtained her BS in electrical engineering at the prestigious Indian Institute of Technology, Kharagpur, and then came to the United States to pursue a Masters in Computer Science at Portland State University in Oregon. She worked in the software industry for more than a decade but is now at home in California with her husband and two sons to enrich their lives and to create her own origami designs. Some people who have provided her with much origami inspiration and encouragement are Rosalinda Sanchez, David Petty, Francis Ow, Rona Gurkewitz, Ravi Apte, Rachel Katz, and many more.Meenakshi Mukerji was awarded the 2005 Florence Temko Award by OrigamiUSA for her contributions to origami. She is the author of Marvelous Modular Origami and Ornamental Origami: Exploring 3D Geometric Designs, and she maintains the popular modular origami website, www.origamee.net.