The Girl with the White Flag (Paperback) 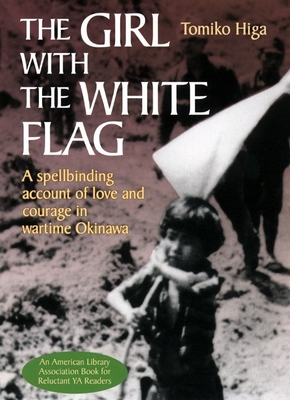 The Girl with the White Flag (Paperback)


Email or call for price
New York Newsday called this memoir of a warhood childhood in Japan "one of the saddest and yet most uplifting books about childhood you will ever encounter."


Separated from her family in the confusion and horror of World War II, seven-year-old Tomiko Higa struggles to survive on the battlefield of Okinawa, Japan. There, as some of the fiercest fighting of the war rages around her, she must live alone, with nothing to fall back on but her own wits and daring. Fleeing from encroaching enemy forces, searching desperately for her lost sisters, taking scraps of food from the knapsacks of dead soldiers, risking death at every turn, Tomiko somehow finds the strength and courage to survive.


Many years later she decided to tell this story. Originally intended for juvenile readers, it is sure to move adults as well, because it is such a vivid portrait of the unintended civilian casualties of any war.
Born in Okinawa, TOMIKO HIGA worked for twenty-seven years at the Okinawa branch of the American Express Company while completing her high school and undergraduate education. She graduated in law from the University of Okinawa in 1991. In 1984, when film footage of a little girl carrying a white flag drew public attention, Higa finally decided to come forward. Her gripping narrative achieved popular and critical acclaim in her native country, and the now-famous photo of the author has become a symbol calling for world peace.
"One of the saddest yet most uplifting books about childhood you will ever encounter. ... A powerful document as well as a completely engrossing adventure." —Newsday

"[A] moving memoir... All will be touched by Higa's tenacity under impossible circumstances and will be reminded that children continue to be the worst victims of war." —School Library Journal

". .. her unaffected memoir serves as a reminder that in any war, 'noncombatants' suffer grievously." —Los Angeles Times Book Review

"A testimony to the resilience of the human spirit. [It] is a short book that you will not be able to put down once you start to read it." —City life News

"...an original, candid, and attention gripping autobiographical narrative which is superbly written and enthusiastically recommended..." —Bookwatch