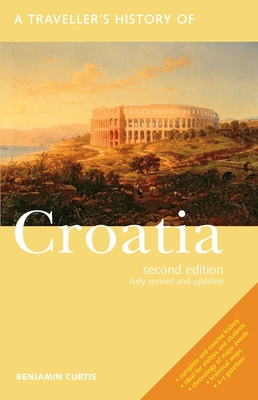 
Email or call for price
George Bernard Shaw wrote that on the last day of Creation, “God desired to crown His work,” and so fashioned the Croatian coastline “out of tears, stars, and breath.” Anyone who has glimpsed that long, mountainous, island-studded coast would surely agree that its beauty is little short of divine. Croatia, quite simply, is blessed with some of the most spectacular scenery on the planet and in recent years has become a favorite tourist destination. A Traveller’s History of Croatia offers tourists and travellers an inside look at the complex roots of Croatian history and the many influences they will see on its towns, ports and islands. The country has been a melting-pot of Mediterranean, Central European and Italian cultures. After a look at how its geography and geology have shaped the nation, a fascinating story unfolds explaining its past: why there are so many Greek and Roman archaeological remains, the coming of Christianity, the sad tale of how the early blooming of the Croatian state in the 9th century was thwarted by its subsequent partition and absorption into the Venetian, Habsburg and Ottoman Empires and the tortuous struggle for sovereignty in the nineteenth century. The twentieth century brought new solutions in the founding of Yugoslavia, problems with Croatian nationalism and the horrors of invasion in World War II. Under Tito a new stability came to the region until the battles of the 1990s, which were finally resolved with the international recognition of an independent state in 1992. One definite conclusion can be drawn about Croatia in the early twenty-first century: this is the best time in all of Croatian history. The country is after all independent, democratic, with a stable economy, and it has established itself as one of the world’s most coveted tourist destinations.
Benjamin Curtis is a professor of European history and politics at the University of Seattle. He is a frequent visitor to Croatia as an educational tour guide and he reads and speaks the language fluently.
In this concise volume, Curtis does an admirable job of condensing the lengthy and complex history of Croatia, from Roman times to the present-day debates over whether the country should join the European Union. --Library Journal

An excellent series of brief histories. --The New York Times

Invaluable. Whether you're travelling or not. --The Guardian

"In this concise volume, Curtis (European history & politics, Univ. of Seattle) does an admirable job of condensing the lengthy and complex history of Croatia ... Its long journey toward independence is detailed in clear prose, and a helpful list of rulers and chronology ends the book. The maps and historical gazetteer are also useful"

"The world we live in is becoming more and more customized and travel is no exception. Vacationers are moving away from the one-size-fits-all tours and looking for the tailor-made trip. Travel writers have responded, and there is now a wide variety of books available outlining specialty travel for everyone...History buffs will also find 'A Traveler's History of Croatia', by Benjamin Curtis...an enlightening read prior to a trip to that country. Chronicling Croatia's history from prehistoric time to the present, Curtis' book explores how the country's position at the crossroads of three distinct cultures, Mediterranean, Central European, and Balkan, has fueled a tumultuous past of conflict. Yet, the Croatian people managed to create and maintain a national identity that brought them through. The stunningly beautiful coastline and diverse historical landmarks have made Croatia a popular tourist destination in recent years. Having a deeper understanding of the country beforehand will enhance the traveler's experience once there...It is well worth the time spent to personalize an upcoming trip using knowledge gleaned from well-written travel books such as these."