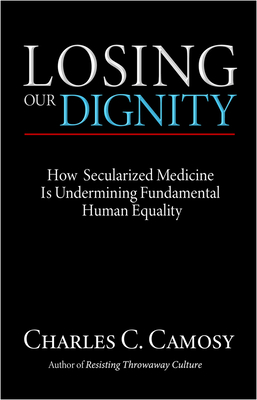 An Urgent and Timely Release from Charles Camosy, the award-winning author of Resisting Throwaway Culture

There is perhaps no more important value than fundamental human equality. And yet, despite large percentages of people affirming the value, the resources available to explain and defend the basis for such equality are few and far between. In his newest book Charles Camosy provides a thoughtful defense of human dignity.

Telling personal stories like those of Jahi McMath, Terri Schiavo, and Alfie Evans, Camosy, a noted bioethicist and theologian, uses an engaging style to show how the influence of secularized medicine is undermining fundamental human equality in the broader culture. And in a disturbing final chapter, Camosy sounds the alarm about the next population to fall if we stay on our current trajectory: dozens of millions of human beings with dementia.

Heeding this alarm, Camosy argues, means doing two things. First, making urgent and genuine attempts to dialogue with a secularized culture which cannot see how it is undermining one of its most foundational values. Second, religious communities which hold the Imago Dei sacred must mobilize their existing institutions (and create new ones) to care for a new set of human beings our throwaway culture may deem non-persons.

Charles Camosy is associate professor of theological and social ethics at Fordham University. His most recent book, Resisting Throwaway Culture, won first place from the Catholic Publishers Association as "Resource of the Year." In addition to advising the Faith Outreach Office of the Humane Society of the United States and the pro-life commission of the Archdiocese of New York, Camosy received the Robert Bryne award from the Fordham Respect Life Club and received the 2018 St. Jerome Award for scholarly excellence from the Catholic Library Association.