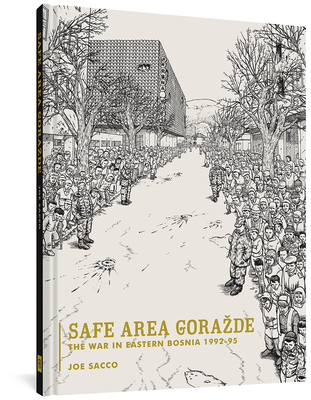 The winner of the 2001 Eisner Award for Best New Graphic Album. Sacco spent five months in Bosnia in 1996, immersing himself in the human side of life during wartime, researching stories that are rarely found in conventional news coverage, emerging with this astonishing first-person account.

Praised by The New York Times, Brill's Content and Publishers Weekly, Safe Area Gorazde is the long-awaited and highly sought after 240-page look at war in the former Yugoslavia. Sacco (the critically-acclaimed author of Palestine) spent five months in Bosnia in 1996, immersing himself in the human side of life during wartime, researching stories that are rarely found in conventional news coverage. The book focuses on the Muslim-held enclave of Gorazde, which was besieged by Bosnian Serbs during the war. Sacco lived for a month in Gorazde, entering before the Muslims trapped inside had access to the outside world, electricity or running water. Safe Area Gorazde is Sacco's magnum opus and with it he is poised too become one of America's most noted journalists. The book features an introduction by Christopher Hitchens, political columnist for The Nation and Vanity Fair.

Joe Sacco lives in Portland, Oregon. He is the author of many acclaimed graphic novels, including Palestine, Safe Area Gorazde, But I Like It, Notes from a Defeatist, The Fixer, War's End, and Footnotes in Gaza.

[Demonstrates] how brilliantly comics can serve as reportage.
— The New York Times

Graphic in every sense of the term, Sacco’s account of everyday
life in a city under siege puts one of the twentieth century’s least
understood catastrophes in perspective; it’s the best argument around
for comics as a journalistic medium.
— GQ

Joe Sacco is an engaging and direct writer, but above all, he is a good journalist. Comics just happen to be the outlet for his reportage... [he is] a master of the unique medium of comics journalism.
— William Jones - Graphic Novel Reporter

Published soon after the conflict that it documents, Safe Area Gorazde is an intense reading experience and an active call for the condemnation of tribal and international leaders who put politics ahead of humanity.