A Question of Choice (Paperback) 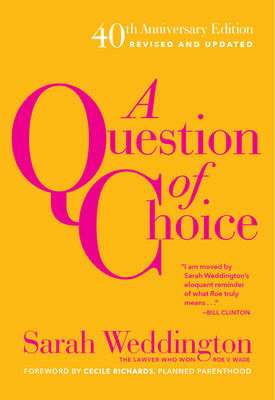 A Question of Choice (Paperback)

A memoir filled with "valuable, passionate insights" from the lawyer who argued the landmark Roe v. Wade case to the Supreme Court (Kirkus Reviews).

More than 40 years ago, the highest court in the land handed down a decision that would forever alter the lives of women throughout the United States. Roe v. Wade became the seminal lawsuit that gave American women the legal right to abortion.

Weddington, just 27 years old in 1973, became a key figure in the reproductive rights movement when she took on the case. Here she recounts her remarkable story, from her personal experience with abortion and the workforce discrimination she faced in her early career to the judicial proceedings and long journey she has undertaken in fighting for women's rights since.

As divisive as ever, the famous decision is continually threatened by organized pro-life groups. Weddington compels "those who are willing to share the responsibility of protecting choice," to follow her plan of action in supporting the legal rights of women. A Question of Choice is an "eloquent reminder of what Roe truly means--that our most private decisions can be made behind the closed doors of our homes, with our families, and in private conversations with our hearts" (Former President Bill Clinton).

Sarah Weddington is an attorney and lecturer from Austin Texas. She became a key figure in the reproductive rights movement when at the age of twenty-seven she successfully argued Roe v. Wade, the landmark court case that gave American women the right to abortion. She has served in the Texas house of representatives, and was a White House advisor to President Jimmy Carter. Weddington travels the country, lecturing on leadership and women's issues.