The Last Five Years: The Complete Book and Lyrics of the Musical (Applause Libretto Library) (Paperback) 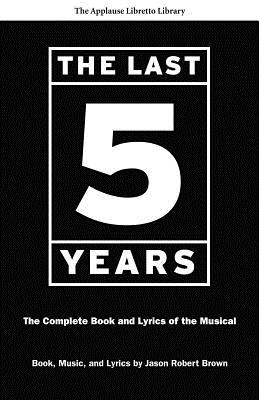 The Last Five Years: The Complete Book and Lyrics of the Musical (Applause Libretto Library) (Paperback)


Usually Ships in 1-5 Days
An emotionally powerful and intimate musical about two New Yorkers in their twenties who fall in and out of love over the course of five years. The show's unconventional structure consists of Cathy, the woman, telling her story backwards while Jamie, the man, tells his story chronologically; the two characters meet only once, at their wedding in the middle of the show. Jason Robert Brown won Drama Desk Awards for the music and the lyrics after the Off-Broadway premiere in 2002 starring Norbert Leo Butz and Sherie Rene Scott. The show has since been produced at almost every major regional theater in the U.S., and has been seen in Korea, Japan, the Philippines, Germany, Italy, Canada, Spain, and the UK.