Theatre/Theory/Theatre: The Major Critical Texts from Aristotle and Zeami to Soyinka and Havel (Applause Books) (Paperback) 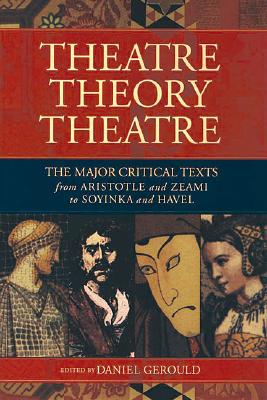 Theatre/Theory/Theatre: The Major Critical Texts from Aristotle and Zeami to Soyinka and Havel (Applause Books) (Paperback)


Usually Ships in 1-5 Days
Available for the First Time in Paperback From Aristotle's Poetics to Vaclav Havel, the debate about the nature and function of theatre has been marked by controversy. Daniel Gerould's landmark work, Theatre/Theory/Theatre, collects history's most influential Eastern and Western dramatic theorists - poets, playwrights, directors and philosophers - whose ideas about theatre continue to shape its future. In complete texts and choice excerpts spanning centuries, we see an ongoing dialogue and exchange of ideas between actors and directors like Craig and Meyerhold, and writers such as Nietzsche and Yeats. Each of Gerould's introductory essays shows fascinating insight into both the life and the theory of the author. From Horace to Soyinka, Corneille to Brecht, this is an indispensable compendium of the greatest dramatic theory ever written.