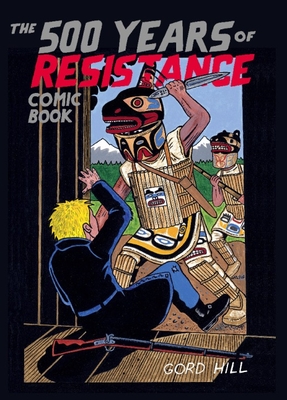 A powerful and historically accurate graphic portrayal of Indigenous peoples' resistance to the European colonization of the Americas, beginning with the Spanish invasion under Christopher Columbus and ending with the Six Nations land reclamation in Ontario in 2006. Gord Hill spent two years unearthing images and researching historical information to create The 500 Years of Resistance Comic Book, which presents the story of Aboriginal resistance in a far-reaching format.

Other events depicted include the 1680 Pueblo Revolt in New Mexico; the Inca insurgency in Peru from the 1500s to the 1780s; Pontiac and the 1763 Rebellion and Royal Proclamation; Geronimo and the 1860s Seminole Wars; Crazy Horse and the 1877 War on the Plains; the rise of the American Indian Movement in the 1960s; 1973's Wounded Knee; the Mohawk Oka Crisis in Quebec in 1990; and the 1995 Aazhoodena/Stoney Point resistance.

With strong, plain language and evocative illustrations, The 500 Years of Resistance Comic Book documents the fighting spirit and ongoing resistance of Indigenous peoples through five hundred years of genocide, massacres, torture, rape, displacement, and assimilation: a necessary antidote to the conventional history of the Americas. Includes an introduction by activist Ward Churchill, leader of the American Indian Movement in Colorado and a prolific writer on Indigenous resistance issues.

Gord Hill, a member of the Kwakwaka'wakw Nation in British Columbia, has been active in Indigenous resistance, anti-colonial, and anti-capitalist movements since 1990. He is also author of The 500 Years of Resistance, a pamphlet published by PM Press.

Gord Hill: Gord Hill is a member of the Kwakwaka'wakw nation in British Columbia. He has been active in Indigenous resistance, anti-colonial, and anti-capitalist movements since 1990. He is also the author of The 500 Years of Indigenous Resistance, a slim volume of history published by PM Press (and distributed by AK Press) in 2009 that is a companion to the graphic novel. Ward Churchill: Ward Churchill is a writer, political activist, and co-director of the American Indian Movement of Colorado. He is the author of numerous books on political and Indigenous peoples' resistance, including On the Justice of Roosting Chickens, Struggle for the Land, and Acts of Rebellion.

"Gord Hill blends his visual and literary talents to tell the story of aboriginal life since the arrival of Europeans in the Western Hemisphere in 1492.... 500 Years of Resistance succeeds as a bold primer on colonialism and its haunting legacy today."
This Magazine

"The 500 Years of Resistance Comic Book is a milestone. Never before have I come across a non-fiction graphic novel capable of evoking such a powerful emotional response. Dealing with such topics as genocide, oppression and assimilation the comic is sure to cause frustration and sadness in the reader. At the same time, 500 Years of Resistance is inspirational and empowering, accurately depicting the strength and nobility of Native warriors. Gord’s straightforward approach to writing coupled with his iconic illustrations has created a truly groundbreaking comic book."
—Redwire Media