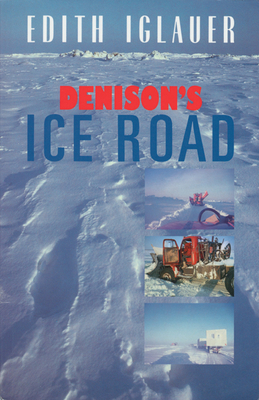 
Usually Ships in 1-5 Days
In savage blizzards, blinding whiteouts and 60-below-zero temperatures, steel axles snap like twigs; brakes and steering wheels seize up; bare hands freeze when they touch metal. The lake ice cracks and sometimes gives way, so the roadbuilders drive with one hand on the door, ready to jump.

John Denison and his crew waited for the coldest, darkest days of winter every year to set out to build a 520-kilometre road made of ice and snow, from Yellowknife in the Northwest Territories to a silver mine on Great Bear Lake, above the Arctic Circle - this is their story.

Edith Iglauer was the first outsider ever to accompany them as they worked. This book, her chronicle of a gruelling, fascinating journey through Canada's north, has sold over 20,000 copies since its first publication in 1974.
Edith Iglauer was born in Cleveland, Ohio. She married Philip Hamburger and raised two sons in New York. A frequent contributor to the New Yorker, she has written a great deal about Canada. Her first book, The New People (1966, reprinted and updated as Inuit Journey in 1979 and 2000) chronicled the growth of native cooperatives in the eastern Arctic. She profiled Pierre Trudeau in 1969 and internationally known architect Arthur Erickson in 1979. Denison's Ice Road is about the building of a 325-mile winter road above the Arctic Circle. Divorced in 1966, she came to Vancouver in 1973. She married John Heywood Daly, a commercial salmon troller and moved to Garden Bay on the BC coast. Daly died in 1978. After writing Seven Stones: A Portrait of Arthur Erickson, Architect (1981) she began recording her memories of her late husband and his salmon troller the MoreKelp. The result was Fishing with John, a runaway bestseller and nominee for the 1989 Governor General's Award for Non-Fiction. Her second memoir, about her career in journalism, was The Strangers Next Door.