The Sweetness of Water (Oprah's Book Club): A Novel (CD-Audio) 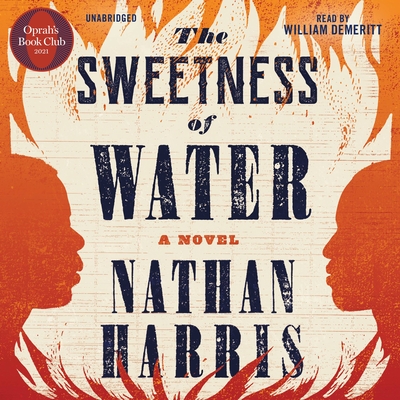 The Sweetness of Water (Oprah's Book Club): A Novel (CD-Audio)

“I was holding my breath through this beautifully woven story of love, family, belonging, and loss set in the South at the end of the Civil War. There's so much heart and soul in this book. It is destined for awards.”
— Jamie Southern, Bookmarks, Winston-Salem, NC

In the spirit of The Known World and The Underground Railroad, an award-winning “miraculous debut” (Washington Post) about the unlikely bond between two freedmen who are brothers and the Georgia farmer whose alliance will alter their lives, and his, forever

In the waning days of the Civil War, brothers Prentiss and Landry—freed by the Emancipation Proclamation—seek refuge on the homestead of George Walker and his wife, Isabelle. The Walkers, wracked by the loss of their only son to the war, hire the brothers to work their farm, hoping through an unexpected friendship to stanch their grief. Prentiss and Landry, meanwhile, plan to save money for the journey north and a chance to reunite with their mother, who was sold away when they were boys.

Parallel to their story runs a forbidden romance between two Confederate soldiers. The young men, recently returned from the war to the town of Old Ox, hold their trysts in the woods. But when their secret is discovered, the resulting chaos, including a murder, unleashes convulsive repercussions on the entire community. In the aftermath of so much turmoil, it is Isabelle who emerges as an unlikely leader, proffering a healing vision for the land and for the newly free citizens of Old Ox.

With candor and sympathy, debut novelist Nathan Harris creates an unforgettable cast of characters, depicting Georgia in the violent crucible of Reconstruction. Equal parts beauty and terror, as gripping as it is moving, The Sweetness of Water is an epic whose grandeur locates humanity and love amid the most harrowing circumstances.

One of President Obama's Favorite Books of 2021

Winner of the Ernest J. Gaines Award for Literary Excellence

Winner of the Willie Morris Award for Southern Fiction

Longlisted for the Man Booker Prize

Shortlisted for the Dylan Thomas Prize

Longlisted for the 2022 Carnegie Medal for Excellence

Longlisted for the Center for Fiction First Novel Prize

Nathan Harris holds an MFA from the Michener Center at the University of Texas. He is a recipient of the University of Oregon's Kidd Prize and was a finalist for the Tennessee Williams Fiction Prize. He lives in Austin, Texas. The Sweetness of Water is his first novel.

“Harris’s debut novel is remarkable; that he’s only 29 is miraculous. His prose is burnished with an antique patina that evokes the mid-19th century. And he explores this liminal moment in our history with extraordinary sensitivity to the range of responses from Black and White Americans contending with a revolutionary ideal of personhood... All of this is drawn with gorgeous fidelity to these cautious characters, struggling to remake the world, or at least this little patch of it... Harris stacks the timbers of this plot deliberately, and the moment a spark alights, the whole structure begins to burn hot... What’s most impressive about Harris’s novel is how he attends to the lives of these peculiar people while capturing the tectonic tensions at play in the American South.”—Ron Charles, Washington Post

“This debut novel astonished us as much for its wise, lyrical voice as for its dense realization of a fictional small town in the American South at a rarely written-about moment, the immediate aftermath of the Civil War. We were incredibly impressed by the way it probes themes of trans-historical importance—about race, sexuality, violence, and grief—through meticulously-drawn characters and a patient examination of their relationships.”—Booker Prize committee

“As I read this masterful novel I kept thinking—this young 29-year-old is a first-time author, so how did he do this?... As the best writers can do, Nathan takes us back in time, and helps us to feel we are right there with Prentiss and Landry as they get their first taste of freedom. I rooted for them, and feared for them too."—Oprah Winfrey, Oprah Daily

“A historical page-turner about social friction so powerful it ignites a whole town . . . The novel’s questions feel urgent . . . Like a fictional companion to Clint Smith’s history, How the Word Is Passed, The Sweetness of Water joins the national conversation on race and reckoning with history . . . Nathan Harris makes those extraordinary, still-contested times comprehensible through immersive, incredibly humane storytelling about the lives of ordinary people . . . Hope is the driving force in The Sweetness of Water . . . Harris spins an increasingly complex tale about the postwar South, and he tells it in a humane and intimate way, by exploring interpersonal relationships of all kinds in and around this rural Georgia town. . . And even though the story focuses on hope and unexpected kinship, it doesn't diminish the horrors of slavery or the struggle in its wake. The events of the brothers’ former lives are never far from memory—whipping, beating, disfiguring physical abuse, family separation, near starvation, dehumanization. None of that is denied. None of it is minimized. But like the brothers, Harris tries to train the focus elsewhere for a time. As an act of pure storytelling, The Sweetness of Water soars . . . The novel is a riveting drama-filled exploration of a fracture and a healing . . . The Sweetness of Water leaves a lasting and multifaceted impression: It’s warm and absorbing, thought-provoking and humane.”—NPR

“Rich prose and such a beautifully imagined time and place… Amazing book by any account and that it’s a first novel makes it even more to be treasured.”—Bill Goldstein, NBC New York

“This is a debut novel, but the writing is so strong and gorgeous and assured, and the characters have so many layers to them, you'll keep reading just to see what's revealed next.”—Petra Mayer, NPR “Here & Now”

“A fine, lyrical novel, impressive at the level of the sentence, and in its complex interweaving of the grand and the intimate, of the personal and political.”—Alex Preston, The Guardian

“An extraordinary debut novel . . . Harris expertly introduces explosive plot twists across parallel threads . . . There’s an elegant interplay among all facets of the narrative that at once raises the stakes for all the characters while gesturing toward a larger world outside Old Ox. The overall effect is a dazzling world-building that makes the relatively compact novel feel much larger . . . Harris manages to weave emotion into the smallest of moments . . . The novel asks us to consider white-supremacist ideology not as a uniquely Southern phenomenon, but as an uncomfortable truth and feature of the entire American endeavor, especially of the criminal justice system. Old Ox is in Georgia, but it is also everywhere today. Harris writes with the confidence and command of a seasoned master of the craft. And, of course, the magic of his sentences is in the details—everything is historically accurate and painstakingly researched, whether he’s describing the reprieve of a fresh tick mattress or the complexity of growing peanuts in Georgia soil. This novel is simply the best I have read in years.”—Daniel Peña, Texas Monthly

“What a gifted, assured writer Nathan Harris is. He does what all novelists are supposed to do—give birth to vivid characters, people worth caring about, and then get out of their way. The result is better than any debut novel has a right to be. With The Sweetness of Water, Harris has, in a sense, unwritten Gone With the Wind, detonating its phony romanticism, its unearned sympathies, its wretched racism.”—Richard Russo, Pulitzer Prize-winning and New York Times bestselling author of Bridge of Sighs