The Plot to Destroy Democracy Lib/E: How Putin and His Spies Are Undermining America and Dismantling the West (Compact Disc) 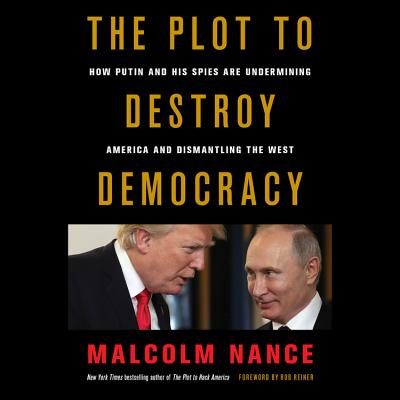 The Plot to Destroy Democracy Lib/E: How Putin and His Spies Are Undermining America and Dismantling the West (Compact Disc)

Retired Intelligence officer and New York Times bestselling author of The Plot to Hack America Malcolm Nance offers a provocative, comprehensive analysis of the Russian Federation's master plan to destroy democracy, the methodologies used in the 2016 election, what will be their next steps, and how to stop them.

Malcolm Nance's previous book, the New York Times bestselling The Plot to Hack America, blew the whistle on Russia's hacking of the Democratic National Committee and Vladimir Putin's plans to undermine the 2016 presidential election, alerting the public to the full scale of the hacking and helping usher that story to the top of the headlines. Based on his original research and countless interviews with espionage experts, Nance's new book, The Plot to Destroy Democracy, examines why Putin and his underlings aimed to sabotage the election, reveals the full scope of their plans-including how the hacking accomplished a crucial first step for destabilizing the West-as well as what they have in store.

The Plot to Destroy Democracy exposes how Russia has supported the campaigns of right-wing extremists throughout the United States and Europe, seeking to create antidemocratic sentiment around the world that can be leveraged to build a Russian-led alliance of nondemocratic autocracies. Nance examines how and why Putin's associates have sought to bring fringe candidates in the West into the mainstream and how they have used the populist battlefield of social media to mount their vicious campaigns.

Revelatory, insightful, and at times shocking, The Plot to Destroy Democracy reveals for the first time how Russia's recent hackings in the United States and Europe and its increasingly belligerent rhetoric fit into its master plan to unseat democracies around the world.