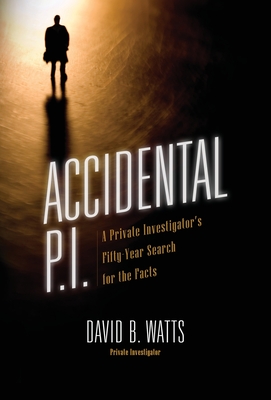 By David B. Watts

Confessions of a private investigator revealed.

Have you ever wondered what it would be like to be a real-life private investigator--watching the bad guys through binoculars during a surveillance or interviewing witnesses in a murder case? Maybe you've envisioned testifying in a big federal court case or meeting with Fortune 500-types and advising them when their company is in trouble. Accidental P.I. takes you on a thrill ride following the fifty-year professional career of Private Investigator David Watts, as his life story treats you to these experiences and more. From murder, rioting, gambling and drug raids to sex cases, and fraud, this behind-the-scenes peek at real-life cases shows how investigators get the job done--not like in the movies or on television.

David Watts entered the investigative field as a young New Jersey policeman at the beginning of the turbulent 1960s. His descriptions of the seedier side of the cultural revolution during that era is riveting . . . and you get to go along for the ride Switching to the private sector, he worked several years investigating insurance fraud before starting his own business in 1976. He has been at it ever since.

"An insider look on how cases are investigated and facts developed in preparation for trial, this memoir is also a candidly fun glimpse into the personalities and foibles of those involved. This is quality entertainment authored by someone who has 'been there.' A great read for those who appreciate authenticity."
--Robert W. Becker, Esquire
Civil Litigator in Albuquerque, New Mexico

David B. Watts, a licensed private investigator, specializes in fraud and business investigations. His investigation experience started in his twenties as a Plainfield, New Jersey, patrolman, then detective and ultimately took him into his own investigation agency. His work has taken him across the country and the globe. Now in his seventies, he is respected among his peers and continues to take on cases. David writes articles for Res Gestae, the monthly magazine of the Lee County Florida Bar Association, as well as Southwest Florida Business Today, a monthly business newspaper based in Naples, Florida.