How to Get Rid of a President: History's Guide to Removing Unpopular, Unable, or Unfit Chief Executives (Hardcover) 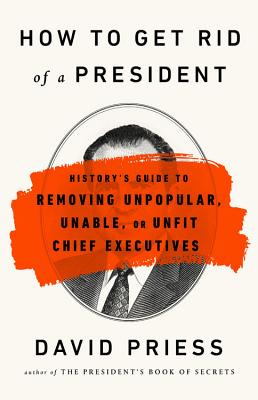 How to Get Rid of a President: History's Guide to Removing Unpopular, Unable, or Unfit Chief Executives (Hardcover)


Email or call for price
A vivid political history of the schemes, plots, maneuvers, and conspiracies that have attempted -- successfully and not -- to remove unwanted presidents

To limit executive power, the founding fathers created fixed presidential terms of four years, giving voters regular opportunities to remove their leaders. Even so, Americans have often resorted to more dramatic paths to disempower the chief executive. The American presidency has seen it all, from rejecting a sitting president's renomination bid and undermining their authority in office to the more drastic methods of impeachment, and, most brutal of all, assassination.

How to Get Rid of a President showcases the political dark arts in action: a stew of election dramas, national tragedies, and presidential departures mixed with party intrigue, personal betrayal, and backroom shenanigans. This briskly paced, darkly humorous voyage proves that while the pomp and circumstance of presidential elections might draw more attention, the way that presidents are removed teaches us much more about our political order.

Dr. David Priess is Publisher of Lawfare, Chief Operating Officer of the Lawfare Institute, and co-host of the Chatter podcast. He concurrently works as a visiting professor at George Mason University's Schar School of Policy and Government and a senior fellow at the Schar School's Michael V. Hayden Center for Intelligence, Policy, and International Security. Priess, who has a PhD in political science from Duke University, served at the CIA as an intelligence officer, a manager, and a daily intelligence briefer during the presidencies of Bill Clinton and George W. Bush. He is the author of two books, The President’s Book of Secrets and How to Get Rid of a President. He has appeared often in national media like CNN, MSNBC, Fox News, and NPR to discuss the presidency, national security, and intelligence issues and has written on the same topics for many national publications.


Getting rid of presidents was never as entertaining as it is in David
Priess's hands. He barnstorms through more than two centuries of American
history, showing all the ways-from impeachment to death-that presidents have
either left office prematurely or just barely avoided doing so. Dramatic and
instructive, his narrative has clear resonance for the present day as calls
grow for President Trump's impeachment.—MaxBoot, Washington Post columnist and author of The Corrosion of Conservatism

The temptation to impeach a president can run high in a polarized
political environment but is fraught with peril as David Priess meticulously
demonstrates in this timely book that romps through American history to answer
all the questions about removing an unfit president by non-electoral means that
you were afraid to ask.—AmandaCarpenter, CNN contributor and author of GaslightingAmerica

With the objective eye of a former intelligence officer and an uncanny
instinct for deep truths, David Priess paints a genuinely non-partisan portrait
of presidential removals. The stories here are eerily relevant to today's
headlines, but also disarmingly fun to read.—MichaelHayden, former Director of the Central Intelligence Agency and author of The Assault on Intelligence

Legal scholars, political scientists, and pundits have dissected various
means of undermining and removing leaders, ranging from voting them out of
office to impeaching them. Now, with How To Get Rid of a President, David
Priess finally racks and stacks all of the methods, fair and foul, in an
entertaining and approachable sweep of history.—BenjaminWittes, senior fellow in governance studies at the Brookings Institution andeditor in chief of the Lawfare blog

"A companionable history of U.S. presidents in crisis... Priess excels at making presidents look tragically human... Anyone distressed or appalled by today's rancorous clashes over presidential prerogative and power may take comfort from learning that the nation has weathered it all before."—Booklist, Starred Review

"Piquant studies of presidential woe.... A collection of colorful, slightly morbid vignettes that connoisseurs of political picaresque will relish."—Publishers Weekly