Colonial Virginia's War Against Piracy: The Governor & the Buccaneer (Hardcover) 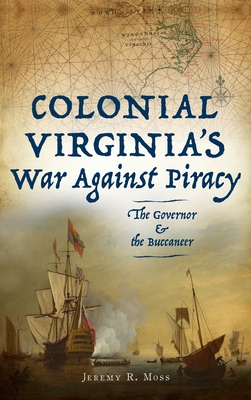 Colonial Virginia's War Against Piracy: The Governor & the Buccaneer (Hardcover)

The story of a high stakes rivalry between Governor Francis Nicholson and pirate captain Louis Guittar.

Governor Francis Nicholson of Virginia was a proven pirate-hunter and enforcer. By the spring of 1700, his concerns about pirate activity in the Chesapeake Bay and rivers of Virginia were at a fever pitch. Nicholson was unimpressed with the HMS Essex Prize and its commander, John Aldred, who had been tasked with keeping colonial shores safe from smuggling. The HMS Shoreham was sent to Virginia to secure the area from the scourge of piracy, and its arrival brought some relief. Then, the arrival of the ship La Paix, commanded by buccaneer captain Louis Guittar, brought Nicholson on high alert and ready for action.

Author Jeremy Moss tells the stories of Nicholson and Guittar through their fateful battle on the Lynnhaven Bay.