The Hellion and the Hero (League of Scoundrels) (Mass Market) 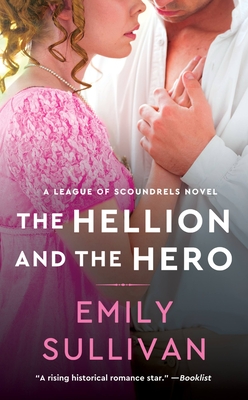 The Hellion and the Hero (League of Scoundrels) (Mass Market)

This is book number 3 in the League of Scoundrels series.

Lady Georgiana Arlington has always done what’s best for her family—even when it meant marrying a man she didn't love to save her father. Her husband’s death has left her stronger and bolder—a hellion, some would even say. When a mysterious enemy jeopardizes her livelihood and reputation, there’s only one person she can trust to help her uncover the threat: the same man she left heartbroken years ago.

Captain Henry Harris is no longer the penniless fortune hunter he was when they first met. Now a decorated naval hero, he could have his choice of women, but no other woman has Georgie’s allure, nor the tenacity he can’t help but admire. Assisting Lady Arlington will put both his body and his heart in danger—and yet, he can’t resist a second chance with the one woman he’s never been able to forget.
Emily Sullivan is an award-winning author of historical fiction set in the late Victorian period. She lives with her family in New England, where she enjoys taking long drives and short walks, and she always orders dessert.
“One particular gem of a new voice is Emily Sullivan, whose 19th century tales of romance and intrigue are designed to keep a reader on the edge of their seat….The Rebel and The Rake will steal readers' hearts before they even realize it's gone, entangling them in the storytelling with much the same stealth as Rafe's investigations.”—Entertainment Weekly

"After wowing readers with her superb debut, rising historical romance star Sullivan returns with another entrancing addition to her League of Scoundrels series that brilliantly showcases her mastery of deep characterization as well as her gift for crafting a wit-infused plot that effectively threads the needle between desire and danger without dropping a single stitch.”—Booklist, Starred Review

"Danger and desire intertwine in this tale of deception and injustice, an engrossing read that follows two characters who deserve their happily ever after."—Bookpage

"The subterfuge provides an intense backdrop that only enhances the complex romance between Sullivan’s intelligent, progressive protagonists. Readers will be taken by independent Sylvia’s quest for love and companionship."—Publisher's Weekly