Summer in Barefoot Bay: 2-in-1 Edition with Barefoot in the Sun and Barefoot by the Sea (Paperback) 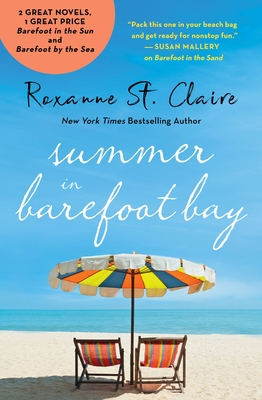 Summer in Barefoot Bay: 2-in-1 Edition with Barefoot in the Sun and Barefoot by the Sea (Paperback)

Fall in love with two feel-good beach romances from a renowned New York Times bestselling author—together for the first time in print!

BAREFOOT IN THE SUN

Ever since her great-aunt Pasha rescued her from a troubled childhood, Zoe Tamarin doesn’t dare stay still for fear of exposing her precarious past. But when her aunt’s health is at risk, there’s only one person who can help—Zoe’s childhood sweetheart, Dr. Oliver Bradbury. Oliver came to Barefoot Bay to start over after his divorce, never expecting to reunite with the girl he once loved. But one look is all it takes to rekindle their passion. Can Oliver help Zoe heal lifelong wounds. . . and keep her from running away with his heart?

BAREFOOT BY THE SEA

Professional gardener Tessa Galloway can grow anything—except what she wants most in the world. She’s finally ready to take a chance on single motherhood when a handsome new coworker enters her life . . . and her heart. Forced into the witness protection program, John Brown is desperate to reunite with his children. But first he has to prove he’s married and stable. Landing a job as a chef in Barefoot Bay is easy enough. And falling for Tessa is even easier. But will his secret be the thing that uproots their happy ending?
Roxanne St. Claire is a New York Times and USA Today bestselling author of more than fifty novels of suspense and romance, including many popular series such as the Dogfather, Barefoot Bay, the Guardian Angelinos, and the Bullet Catchers. She has also penned numerous standalone books and two young adult novels. In addition to being a ten-time nominee and one-time winner of Romance Writers of America prestigious RITA Award, Roxanne has won the National Reader's Choice Award for best romantic suspense four times, as well as the Daphne du Maurier Award, the HOLT Medallion, the Maggie, Booksellers Best, Book Buyers Best, the Award of Excellence, and many others. Her books have been translated into dozens of languages and one has been optioned for film. Roxanne lives in Florida with her husband and adorable dog, and still tries to run the lives of her twenty-something kids.