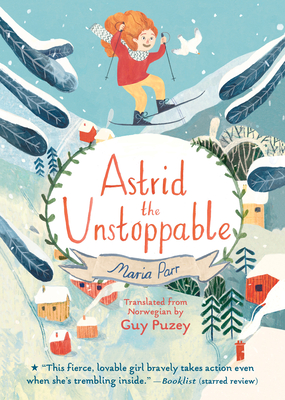 
On Our Shelves Now
Pippi Longstocking meets Heidi meets Anne Shirley in this tale of an irrepressible girl in a mountain village who navigates unexpected changes with warmth and humor.

Speed and self-confidence, that’s Astrid’s motto. Nicknamed “the little thunderbolt,” she loves to spend her days racing down the hillside on her sled, singing loudly as she goes, and visiting Gunnvald, her grumpy, septuagenarian best friend and godfather, who makes hot chocolate from real chocolate bars. She just wishes there were other children to share her hair-raising adventures with. But Astrid’s world is about to be turned upside down by two startling arrivals to the village of Glimmerdal: first a new family, then a mysterious, towering woman who everyone seems to know but Astrid. It turns out that Gunnvald has been keeping a big secret from his goddaughter, one that will test their friendship to its limits. Astrid is not too happy about some of these upheavals in Glimmerdal — but, luckily, she has a plan to set things right.
Maria Parr is the author of Adventures with Waffles, which has been translated into twenty-six languages and made into a children’s TV series in Norway. Astrid the Unstoppable has been translated into nineteen languages and adapted for the stage. Maria Parr lives in Norway with her family.

Guy Puzey grew up in the Highlands of Scotland, just a short swim away from Norway. He now works at the University of Edinburgh as a teacher of Scandinavian linguistic history, children’s literature, and literary translation.

The stylish turns of phrase and swift-paced storytelling, a credit to the translator as well as the author, make the escapades highly suitable for reading aloud in chapters as well as reading alone. Either way, Astrid is a bold, resilient, and emotive heroine whose challenges are just believable enough to bring them within audience reach and whose life will be completely irresistible to young readers.
—Bulletin of the Center for Children's Books (starred review)

Drama and humor are interwoven throughout the well-paced narrative, which transports readers to a distinctive locale and introduces vividly drawn, memorable characters. Small drawings at chapter headings and a double-page map add visual appeal. Norwegian writer Parr, whose Adventures with Waffles (2013) has been translated into many languages, offers another original chapter book with a strong sense of place and international appeal.
—Booklist (starred review)

Imbued with a Scandinavian sensibility, this novel by Parr (Adventures with Waffles) presents fun alongside concepts such as death, physical distance between friends, and estrangement in an age-appropriate format, and both encourages readers to question new ideas and offers a fertile foundation for imagination. Fans of Pippi Longstocking and the Moomins will delight in Parr’s indomitable Astrid.
—Publishers Weekly

Parr's original Norwegian text, published in 2009, has been compared to Heidi and Pippi Longstocking, and Puzey's translation effortlessly conveys that sense for American readers. The warm tone and endearing characters do most of the heavy lifting here...An excellent translation of a contemporary European classic.
—Kirkus Reviews Online