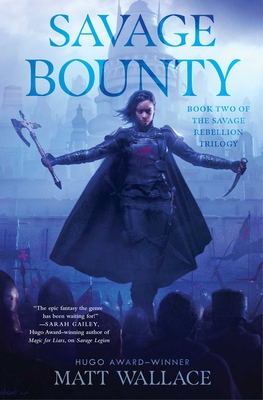 This is book number 2 in the Savage Rebellion series.

The sequel to the acclaimed, spellbinding epic fantasy Savage Legion by Hugo Award–winning author Matt Wallace about a utopian city with a dark secret…and the underdogs who will expose it—or die trying.

The empire relies on them. The greatest weapon they ever developed. Culled from the streets of their cities, they take the ones no one will miss and throw them, by the thousands, at the empire’s enemies. If they live, they fight again. If they die, well, there are always more.

From Hugo Award–winning author Matt Wallace comes the much-anticipated second installment to the “epic fantasy the genre has been waiting for” (Sarah Gailey, Hugo Award–winning author of Magic for Liars).
Matt Wallace is the Hugo nominated author of Rencor: Life in Grudge City and the Sin du Jour series, and he won a Hugo Award alongside Mur Lafferty for the fancast Ditch Diggers. He’s also penned more than a hundred short stories in addition to writing for film and television. In his youth, he traveled the world as a professional wrestler and unarmed combat and self-defense instructor before retiring to write full time. He currently resides in Los Angeles with his wife, Nikki.

"Savage Legion is the epic fantasy the genre has been waiting for!"—Sarah Gailey, Hugo award winning author of Magic for Liars.

"Wallace deploys an epic tag-team of smack-you-in-the-face fight sequences alongside ingenious world building in this fast-paced first round of a fantasy trilogy taking on—and taking down—the allure of empire."—Kate Elliot, acclaimed author of the Crown of Stars series

"Smart characters and brutal action create an intriguing story about power and the decisions made to keep it."
— Library Journal, starred review