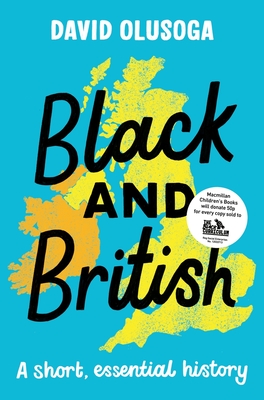 A short, essential introduction to Black British history for readers of 12+ by award-winning historian and broadcaster David Olusoga.

When did Africans first come to Britain?

Who are the well-dressed black children in Georgian paintings?

Why did the American Civil War disrupt the Industrial Revolution?

These and many other questions are answered in this essential introduction to 1800 years of the Black British history: from the Roman Africans who guarded Hadrian’s Wall right up to the present day.

This new children's version of the bestseller Black and British: A Forgotten History is Illustrated with maps, photos and portraits.

David Olusoga is a British-Nigerian historian, broadcaster and BAFTA award-winning presenter and filmmaker. He is Professor of Public History at the University of Manchester and a regular contributor to the Guardian, Observer, New Statesman and BBC History Magazine. His previous books include Black and British, which won the PEN Hessell-Tiltman Prize and the Longman-History Today Trustees Award, The Kaiser’s Holocaust and The World’s War. He was also a contributor to The Oxford Companion to Black British History. In 2019 he was awarded an OBE for services to history and community integration.