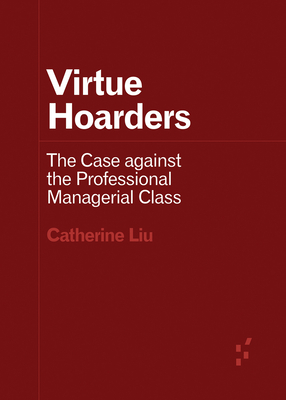 Professional Managerial Class (PMC) elite workers labor in a world of performative identity and virtue signaling, publicizing an ability to do ordinary things in fundamentally superior ways. Author Catherine Liu shows how the PMC stands in the way of social justice and economic redistribution by promoting meritocracy, philanthropy, and other self-serving operations to abet an individualist path to a better world. Virtue Hoarders is an unapologetically polemical call to reject making a virtue out of taste and consumption habits.

Catherine Liu is professor of film and media studies at the University of California, Irvine.

"If a meaningful intellectual current does emerge from the wreckage of contemporary capitalism, it may well begin from the demystification of PMC liberal mores."—Conter

"Virtue Hoarders argues that the professional-managerial class-working class alliance was doomed from the start for the simple reason that the two classes’ interests are fundamentally opposed."—The Washington Examiner

"Virtue Hoarders amplifies a discussion that still needs to be had."—Spiked

"A quick, fun read, polemicising against views which are currently dominant in the US academic left and mainstream media, and characterising these views as expressing the interests of the ‘professional managerial class’ - or ‘PMC’ - as opposed to those of the working class."—Weekly Worker

"Like all good polemics [Virtue Hoarders] is a romp: lively, fun to read."—Jeff Noonan

"Liu, a professor at UC Irvine, draws from a well of experience, humor, and rage to show us how the PMC’s quest for class domination continues to unfold in our gilded age."—Los Angeles Review of Books