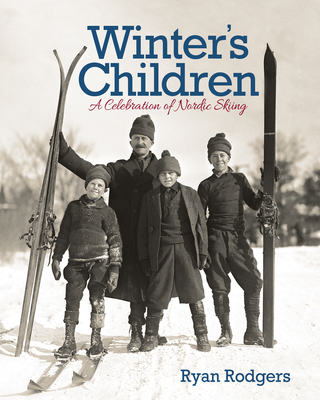 The story of Nordic skiing in the Midwest—its origins and history, its star athletes and races, and its place in the region’s social fabric and the nation’s winter recreation

In the winter of 1841, a Norwegian immigrant in Wisconsin strapped on a pair of wooden boards and set off across the snow to buy flour—leaving tracks that perplexed his neighbors and marked the arrival of Nordic skiing in America. To this day, the Midwest is the nation’s epicenter of cross-country skiing, sporting a history as replete with athleticism and competitive spirit as it is steeped in old-world lore and cold-world practicality. This history unfolds in full for the first time in Winter’s Children.

Nordic skiing first took hold as a sport in the Upper Midwest at the end of the nineteenth century, giving rise to an early ski league and a host of star athletes. With the arrival of a pair of brothers from Telemark, Norway, the world’s best skiers at the time, the sport—and the ski manufacturing industry—reached new heights in Minnesota, only to see its fortunes fall after World War II, when downhill skiing surged in popularity. In Winter’s Children Ryan Rodgers traces the rise and fall of

Nordic skiing in the Midwest from its introduction in the late 1800s to its uncertain future in today’s rapidly changing climate. Along the way he profiles the sport’s stars and stalwarts, from working-class Norwegian immigrants with a near-spiritual reverence for cross-country skiing to Americans passionately committed to the virtues of competitive sport, and he chronicles races like the thrilling 1938 Arrowhead Derby (which ran from Duluth to St. Paul over five days) and the American Birkebeiner, the nation’s largest cross-country event, which takes place every year in northern Wisconsin, snowpack permitting.

Generously illustrated with vintage photography and ski posters, and featuring firsthand observations drawn from interviews, Winter’s Children is an engaging look at the earliest ski teams and touring clubs; the evolution of cross-country skis, gear, and fashion; and the ambitious and ongoing effort to establish and maintain a vast trail network across the Minnesota state park system.

Ryan Rodgers is a freelance writer and avid skier whose work has been published in Backpacker, The Sun, Minnesota Conservation Volunteer, Hamline, and Northern Wilds magazines. The former board president of the Standing Cedars Community Land Conservancy, a 1,500-acre nonprofit land trust along the St. Croix River, he lives with his family in northern Minnesota.

"Ryan Rodgers captures the essence of cross-country skiing in the Midwest, from its earliest days of making wooden skis to the snowmaking loops and large races of today. Learning the rich history of the sport I love so much brings an even greater appreciation to skiing and all the amazing individuals who have collectively changed the sport over the years. The detail and character of the photos woven into Rodgers's storytelling bring this amazing history to life."—Jessie Diggins, Olympic gold medalist and author of Brave Enough

"On a perfect summer night, I read Winter’s Children, and all I could do was wish for snow. Ryan Rodgers’s entertaining chronicle of the development of cross-country skiing reminds us how many before us broke the trail we ski on today."—R.T. Rybak, former mayor of Minneapolis and author of Pothole Confidential

"If you want to take a trip down Nordic skiing's memory lane in the Midwest, I hail Ryan Rodgers's new book, Winter's Children. Having lived many of the experiences he writes about, I found it both a ski journalism achievement and a pleasure to read. His research is meticulous, and the photographs captivate. The pages come alive with stories about the growth of the cross-country ski sport, the brilliance of people like Telemark's late Tony Wise, and the sport’s most beloved and innovative personalities. I couldn't put it down. I'm so pleased Rodgers shares the extraordinary legacy of the people who helped the sport grow and prosper."—Peter Graves, ABC Sports Olympic commentator, cross-country skiing, Lake Placid Olympic Games

"Rodgers takes the epic tales of American skiing, and allows its practitioners to work together with his prose to form a journey with all the ebbs, flows, wanderings, and epiphanies of a long ski in the woods. In doing so, he lifts the stories of this sport, done at the edges of frozen existence, out of the ether and into something material."—FasterSkier

"It is a beautiful book through and through with photos from all eras."—Grand Rapids Herald Review