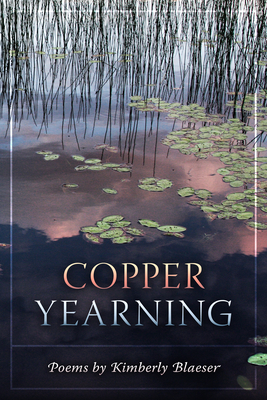 Copper Yearning invests itself in a compassionate dual vision--bearing witness to the lush beauty of our intricately woven environments and to the historical and contemporary perils that threaten them. Kimberly Blaeser's fourth collection of poetry deftly reflects her Indigenous perspective and a global awareness. Through vividly rendered images, the poems dwell among watery geographies, alive to each natural nuance, alive also to the uncanny. Set in fishing boats, in dreams, in prisons, in memory, or in far flung countries like Bahrain, the pieces sing of mythic truths and of the poignant everyday injustices. But, whether resisting threats to effigy mounds or inhabiting the otherness of river otter, ultimately they voice a universal longing for a place of balance, a way of being in the world--for the ineffable.

Kimberly Blaeser, poet, critic, essayist, and fiction writer, is a Professor at the University of Wisconsin--Milwaukee and a member of the low residency MFA faculty for the Institute of American Indian Arts in Santa Fe. She served as Wisconsin Poet Laureate for 2015-2016. Blaeser is Anishinaabe, an enrolled member of the Minnesota Chippewa Tribe, and grew up on White Earth Reservation in northwestern Minnesota. Her collections of poetry include Apprenticed to Justice (2007), Absentee Indians and Other Poems (2002), and Trailing You (1994), which won the Native Writers' Circle of the Americas First Book Award. She is also the author of a critical study on fellow White Earth writer Gerald Vizenor, entitled Gerald Vizenor: Writing in the Oral Tradition (1996), and editor of the anthologies Traces in Blood, Bone & Stone: Contemporary Ojibwe Poetry (2006), and Stories Migrating Home: A Collection of Anishinaabe Prose (1999). Blaeser's poetry, short fiction, and creative nonfiction have been widely published, and selections of her poetry have been translated into several languages including Spanish, French, Norwegian, Indonesian, and Hungarian. Her writing is included in more than forty anthologies and collections such as Native Voices: Honoring Indigenous Poetry from North America (2019), Fire and Ink: An Anthology of Social Action Writing (2009), The Colors of Nature: Culture, Identity, and the Natural World (2011), Thinking Continental: Writing the Planet One Place at a Time (2017), Poetry of Presence: An Anthology of Mindfulness Poems (2017) and Reinventing the Enemy's Language (1997). Blaeser has performed her poetry at over 350 different venues around the globe, and has been the recipient of awards and fellowships from the Wisconsin Arts Board, the Center for 21st Century Studies, the D'Arcy McNickle Center for the History of the American Indian, and the Institute on Race and Ethnicity among others. She is an editorial board member for the "American Indian Lives" series of the University of Nebraska Press, for the "Native American Series" of Michigan State University Press, and for the Indigenous Studies Journal Transmotion. Blaeser, who worked as a journalist before earning her Ph.D. at the University of Notre Dame is also an avid wildlife and nature photographer often exhibiting her photos, ekphrastic poetry, and a mixed-genre art form for which she invented the term "Picto-Poem." She lives in the woods and wetlands of rural Lyons Township Wisconsin and spends part of each year at a water access cabin adjacent to the Boundary Waters Canoe Area Wilderness in northeastern Minnesota.