63 Documents the Government Doesn't Want You to Read (Paperback) 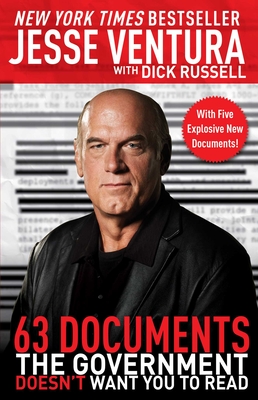 By Jesse Ventura, Dick Russell
$16.99
Email or call for price

New York Times Bestseller! Now with five additional documents and a new introduction, let Governor Jesse Ventura take you through the paperwork that the US government tried to keep secret from the world—JFK and Vietnam, chemical and biological warfare, Gulf War illness, warnings about 9/11, and more!


The official spin on numerous government programs is flat-out bullshit, according to Jesse Ventura. In this incredible collection of actual government documents, Jesse Ventura, the ultimate non-partisan truth-seeker, proves it beyond any doubt. He and bestselling author Dick Russell walk readers through sixty-three of the most incriminating programs to reveal what really happens behind the closed doors. Witness as he breaks open the vault, revealing the truth about
:

Although these documents are now in the public domain, the powers that be would just as soon they stay under wraps. Ventura’s research and commentary sheds new light on what they’re not telling you—and why it matters.

Jesse Ventura is the former independent governor of Minnesota. He is also a former US Navy frogman, a professional wrestler, a movie actor, a visiting fellow at Harvard Kennedy School of Government, and the New York Times bestselling author of seven books, including American Conspiracies, 63 Documents the Government Doesn’t Want You to Read, and Don’t Start the Revolution Without Me! He was the host and executive producer of truTV’s Conspiracy Theory with Jesse Ventura, which won the Stony Award from High Times magazine in 2010. He was also the host of the political talk show Off The Grid, which aired on RT America and online at Ora.tv. He has a reputation as a rebel and a freethinker, and he has no qualms about questioning authority. He spends half the year in Baja, Mexico and the other half in his home state of Minnesota.

Dick Russell has written for such varied publications as Time, Sports Illustrated, and the Village Voice.His books include The Man Who Knew Too Much, Black Genius, and On the Trail of the JFK Assassins. He is also the coauthor of several New York Times bestsellers, including American Conspiracies, 63 Documents the Government Doesn't Want You to Read, and They Killed Our President.