The Luckiest Guy in the World: My Journey in Politics (Hardcover) 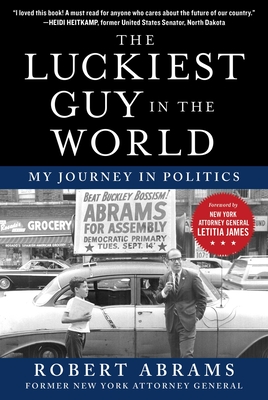 The Luckiest Guy in the World: My Journey in Politics (Hardcover)


Usually Ships in 1-5 Days
The Remarkable True Story of Robert Abrams, the man who changed the New York Attorney General's Office for Good.

At the heart of this political memoir is the story of how the office of state attorney general, an historically sleepy backwater post, has evolved into a front line major protector of the rights of citizens across the country. New York State Attorney General Robert Abrams exercised leadership in organizing attorneys general throughout the nation to take collective action against the Reagan administration’s punishing laissez-faire anti-regulatory policies. Abrams and his fellow attorneys general set the precedent for the successful challenges mounted by today’s attorneys general against the Trump administration’s immigration policies and rollback of consumer and civil rights protections.

Through lively anecdotes, Abrams captures the Bronx of his childhood, his early insurgent grassroots campaigns taking on the powerful Democratic Party machine, the urban challenges of being Bronx Borough President, the turbulent Vietnam anti-war years, and the beginnings of the environmental justice movement. He revisits the explosive Tawana Brawley case where an African American teenage girl alleged rape and brutality by a group of white men that included law enforcement officials.

Abrams provides behind-the-scenes interactions with important figures ranging from Golda Meir, George McGovern, Mario Cuomo, Robert Moses, and Cesar Chavez to Shirley Chisholm. The book demonstrates how ordinary people battling unequal odds against corporate and other powerful forces can prevail when laws are enforced to protect their rights. A chapter about the infamous Love Canal case details the shocking revelation that buried beneath the seemingly placid upstate New York working class community lay tons of toxic waste spawning chronic health problems for residents. Abrams in a landmark lawsuit took on Occidental Petroleum for its callous actions, paved the way for the passage of the Superfund Act and a victory for the emerging environmental justice movement. He describes dramatic confrontations with the radical anti-abortion group, Operation Rescue, and its increasingly violent efforts to deny a woman’s right to choose. His courageous, path-breaking support of LGBT rights, seeking to end the prevailing bigotry with legal victories that ultimately led to marriage equality is also revisited.

In The Luckiest Guy in the World, Robert Abrams wears his progressive values on his sleeve, providing an optimistic view about our nation’s return to its fundamental values. Visit luckiestguyintheworldbobabrams.com for more information.
Robert Abrams, born and raised in the Bronx, went on to become a crusading attorney general of New York from 1979 to 1993. As a reformer, he battled political machine bosses and special interests, winning landmark victories for consumers, protecting the environment, and a woman’s right to choose. He led attorneys general across the nation to protect the rights of all Americans.

"Abrams was a political figure ahead of his time, opposing authoritarian regimes in his advocacy of the plight of Soviet Jewry and his early advocacy for LGBTQ rights.... Instead of settling scores with old adversaries and frenemies like Ed Koch, Mario Cuomo and Al Sharpton, Abrams memoir takes the high road. He is honest about his differences with all three, but he goes to great pains to find common ground with those he jousted with in government and politics … Reading this book will restore one’s faith in the possibilities for progress on two fronts. One, that JFK was right, civility is not a sign of weakness in politics. Two, that government can be made to work for regular folks. A joy-filled read!"
—BRUCE N. GYORY, Empire Report

"New York politicians seem rarely to leave the stage with unsmirched reputations. A rare exception is Robert Abrams...   Abrams memoir, The Luckiest Guy in the World, describes events that were much discussed at the time but only now do we have Abrams’  recollections about them...a good read from a worthy public servant."
—Floyd Abrams (no relation to the author), New York Law Journal

"In his memoir, The Luckiest Guy in the World,  New York State’s former Attorney General Robert Abrams'  tells of his Bronx childhood, his rise in Democratic politics and his role in  battling political machine bosses and special interests. There are behind-the-scenes details of his interactions with world leaders from Golda Meir, George McGovern, Mario Cuomo, Robert Moses, Cesar Chavez to Shirley Chisolm.His progressive values and optimism are present throughout...A must- read!"
—Arlene Kayatt, Our Town

"The Luckiest Guy in the World details Abrams’ 14 years as New York’s top prosecutor and the impact he had on the offices of state attorneys general across the country...  If the book  could impart one message  it would be that “ordinary people can prevail and succeed—even against powerful odds.”
—Ethan Stark-Miller,  The Riverdale Press

“l loved this book! A must read for anyone who cares about the future of our country.”
—HEIDI HEITKAMP, former United States Senator, North Dakota

“Bob Abrams has as many good stories from his life of public service as he does accomplishments, which is no small thing. From taking on the party machine to fighting for civil rights, Bob always led with the values that we need more of in government: integrity, decency, and courage. He may be lucky, but we the people are luckier still.”
—MICHAEL R. BLOOMBERG, former Mayor, City of New York

“Bob Abrams was a role model and mentor for me and others. In this book Bob provides an antidote to the toxic and tawdry politics of our time. His public service was always civil, thoughtful, and principled. This very readable and enjoyable book shows how one good person can make a great difference.”
—JOSEPH LIEBERMAN, former United States Senator, Connecticut

“Bob Abrams has penned an engaging memoir that documents his career battling against powerful foes in protection of the environment, women’s access to reproductive health care, and the civil rights of New Yorkers.”
—DAVID N. DINKINS, former Mayor, City of New York

“For twenty-eight years Bob Abrams was at the center of city and state issues. Abrams consis­tently took strong stands and when he retired it was with honor, dignity and respect. It is all here in this engaging and revealing memoir. If you are interested in New York, it is a must read.”
—KENNETH T. JACKSON, Professor Emeritus, Columbia University

“Robert Abrams’ career in government is a model of public service. In this entertaining and inspiring memoir, he provides great insight into that exemplary career and into the arc of his remarkable life. The picture that emerges is of a man committed to working to make people’s lives better, and to doing so while setting and meeting the highest standards of integrity and excellence.”
—TREVOR MORRISON, Dean, New York University School of Law

"If Bob Abrams feels he's the 'luckiest guy in the world,' I say the world is truly lucky to have him in it! This book will have a treasured place in my library."
—JANET T. MILLS, Governor of Maine

“A progressive tsunami, Bob Abrams washed out the old hacks in the Bronx. This sea change continued into his four terms as New York State Attorney General. You are cheering for this good guy in all his attempts to make things right. And he delivers. His political presence has been a boon to people of color, to women, to the disenfranchised and anyone else not born to entitle­ment.”
—MARISSA PIESMAN, author of The Yuppie Handbook and the Nina Fischman mystery series