From Selma to Shelby County: Working Together to Restore the Protections of the Voting Rights Act (Paperback) 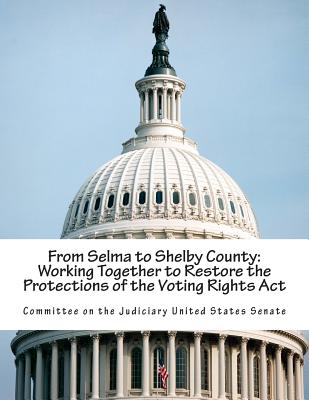 By Committee on the Judiciary United States
$24.95

From its inception and through several reauthorizations, the Voting Rights Act has always been a bipartisan effort. The historic struggle for individual voting rights reached a turning point on the Edmund Pettus Bridge in Selma, Alabama, on March 7, 1965. A group of peaceful marchers led by a young John Lewis were brutally attacked by State troopers. We call it "Bloody Sunday" today from the graphic photographs, and it became a catalyst for the passage of the Voting Rights Act. In Shelby County v. Holder, five Justices of the Supreme Court held that the coverage formula of the Voting Rights Act was outdated. But even the five Justices who struck down the coverage formula in Section 4 have acknowledged that discrimination in voting continues to be a problem. The Supreme Court has called on Congress to come together to update the Voting Rights Act. People die in other parts of the world trying to obtain the right to have a free country with a free right to vote. Americans should not be denied it by just the application of local laws.