Powers: The Best Ever (Paperback) 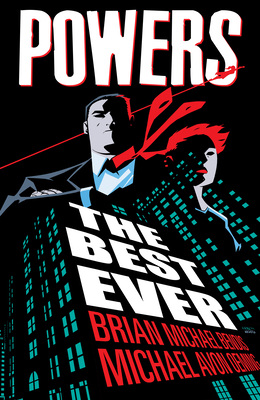 Powers: The Best Ever (Paperback)


Usually Ships in 1-5 Days
Celebrate over twenty years of POWERS with Powers: The Best Ever --  a massive, original graphic novel that is both a perfect jumping on point for newcomers, and essential reading for longtime fans!

Brian Michael Bendis, the New York Times bestselling, Peabody and multi-Eisner award-winning co-creator of Miles Morales, Naomi, and Jessica Jones teams up with his long-time superstar Powers co-creator Michael Avon Oeming to celebrate over twenty years of the Eisner award-winning cops and capes comic, with their most significant Powers story ever!

It's been over two decades since detectives Deena Pilgrim and Christian Walker teamed up to solve the murder of the most beloved superhero Retro Girl. It's been years since they’ve spoken. It's been years since the world changed. But the worst criminal in Powers' history, Wolf, has been reincarnated and all hell has broken loose.  This opus of a graphic novel covers the entire life of the seemingly immortal Christian Walker as he fights one last time to protect those he swore to protect.

Collects issues 7 and 8 of Powers (2015) along with new story material published in the earlier edition of Powers: The Best Ever, plus all comic book covers and a sketchbook section.

Also included is an exclusive look back on the storied legacy of the POWERS comic book series, TV show, and beyond.

Whether you are new to POWERS or a longtime fan, POWERS: THE BEST EVER is a must-have!
Brian Michael Bendis is an American comic book writer and artist. He has won five Eisner Awards for both his creator-owned work and his work on various Marvel Comics books. Starting with crime and noir comics, Bendis eventually moved to mainstream superhero work. With Bill Jemas and Mark Millar, Bendis was the primary architect of the Ultimate Marvel Universe, launching Ultimate Spider-Man in 2000. He relaunched the Avengers franchise with New Avengers in 2004, and has also written the Marvel "event" storylines "Secret War" (2004–2005), "House of M" (2005), "Secret Invasion" (2008), "Siege" (2010) and "Age of Ultron" (2013). In addition to writing comics, Brendis has worked in television, video games and film. He has also taught courses on Graphic Novels at University of Oregon and Portland State University. In 2014, Bendis wrote Words for Pictures: The Art and Business of Writing Comics and Graphic Novels, a book about comics published by Random House.